The innovation of Scribit and other domestic and space robots
Introducing the shining light of Italian industry, with the power to create new jobs 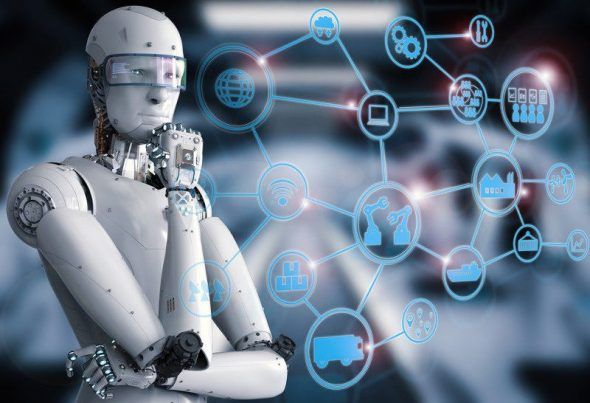 It’s called ‘Scribit’. Scribit is a robot that writes, draws and erases, designed and created by an Italian team headed by Carlo Ratti, architect, engineer and director of the Senseable City Lab at the Massachusetts Institute of Technology in Boston. And, according to the American weekly magazine Time, it is one of the twenty best inventions of 2019. Ratti launched a crowdfunding campaign to fund the creation of his robot, raising a total $2.4 million.

Scribit is therefore the extraordinary result of a synthesis between global innovation moulded by Italian ingenuity, international public financing and high-tech vision, developed at the point where research in university laboratories and industrial manufacturing capacity meet. Ratti is a great poster boy, with a life divided between the USA and professional studios in Turin and Milan.

As a matter of fact, the Italians are leaders in the robotics industry, among the best in the world. The roots of this industry lie in cutting-edge engineering and electronics (the memory of the achievements of Adriano Olivetti and Mario Tchou, the ‘forefathers’ of the computer, is still very much alive: in here recent The Mysterious Affair at Olivetti (published by Knopf), American journalist Meryle Secrest reopens the discussion on the shadowy CIA manoeuvres designed to steal the hard-won crown from the Italians in the technology sector. Furthermore, we can draw upon the wealth of manufacturing knowledge that we boast, and which enables us to continue to claim significant portions of the global markets.

After years of growth, our robotics industry is now suffering the effects of the slowdown of the world economy, as well as the drop in investments in Italy (thanks to the governments, including the Lega Nord-Five Star Movement coalition, which blocked financial support for innovation and contributed to the spread of a general feeling of distrust, linked to the anti-business and anti-science political climate). Despite this, the robotics industry is still full of life, and has what it takes to begin growing and competing once again, as the entire economy comes to terms with the ‘digital revolution’ and with the development of Artificial Intelligence in production processes: ‘Industry 4.0’, the evolution of big data, and a manufacturing sector that is marked by the ‘knowledge economy’ as well as by a paradigm shift with regard to environmental and social sustainability, in which high-tech developments play a crucial positive role.

In order to gain a clearer understanding of all this, it’s worth taking a look at two recent studies, the first by Censis and the second by Symbola and Enel. The former focuses on the fear of innovation with respect to work, and the latter looks at growth opportunities for Italian companies.

The survey by Censis-Adapt (the labour market foundation established in 2000 on the initiative of Marco Biagi, the labour law scholar murdered by the Red Brigades in March 2002) reveals that 7 million people are afraid of losing their jobs as result of the spread of new technologies. A widespread fear, then, but not one that is backed up by the figures: recent studies of the labour market in Europe (Il Giornale, 6 February) show that while 1.64 million low-skilled jobs were replaced by machine activity, a further 3.4 million new posts were created, linked to the increase in productivity as a result of the impact of digital technologies and the spread of new professional areas. Francesco Seghezzi, president of the Adapt Foundation, maintains that these numbers are accurate: ‘The assumption is that innovation and automation lead to a reduction in jobs is incorrect. If anything, we need to reposition and retrain workers. This would provide the mid-market sector – which is most heavily affected by the consequences of technological innovation and changes to jobs – with the potential to increase knowledge levels.’

Training, then. And flexibility, to adapt to new production processes. This issue is clearly explained by Marco Bentivogli, a trade union leader who is acutely aware of the relationship between innovation, the labour market, knowledge and rights. The current Secretary-General of FIM, the federation of metalworkers of the CISL, has released a book entitled (Contrordine compagni (“Against orders, comrades”, published by Rizzoli), a brilliant and well-documented work which serves as a ‘manual of resistance against technophobia, for the redemption of the labour market and of Italy as a whole. … ‘It’s not technology that’s bad for employment. It’s the absence of it.’

These concerns are certainly legitimate. And among the many works that document these concerns is an essay by Marco Magnani, professor at LUISS and Harvard universities, entitled Fatti non foste per vivere come robot (“You were not made to live like robots”, published by Utet), which has just come to bookshops. Among other things, it looks at how half of the 5 million manufacturing jobs that were lost in the US between 2000 and 2017 were a result of automation, and how entire supply chains (from the car industry to the credit industry, and from agriculture to transport and other services) have been turned upside down when it comes to employment. But something else is emerging, albeit not immediately, and as such, we must turn our attention to welfare and training policies that can mitigate the human and social cost of this process. ‘Robots are revolutionising the labour market, but in Italy nobody is thinking about the future’, summarises Massimo Giannini in ‘Affari&Finanza’, in the Italian daily newspaper La Repubblica (10 February). The fact remains that instead of discussing and deciding on these issues with intelligence, knowledge and a sense of responsibility, the last two governments have continued to insist on the welfarism of the ‘citizens’ income’ scheme and the ‘100 quota’ for pensions, and this says a lot about the political insipidness of those who should be leading the country out of the doldrums of the crisis.

Fortunately, players in society and business are also stirring into action. And alongside the existing concerns, the focus should also be on the potential to achieve excellence, as suggested by the Symbola and Enel report on ‘Made in Italy’ innovation and automation, in which a hundred different Italian stories are recounted, covering everything from domestic robots to space robots, companies in the North and South of the country, and technologies that are primed to improve people’s lives: innovations that can be applied to everyday activities, healthcare, industry and research.

Ermete Realacci, president of Symbola, explains: ‘Both our intuition and our experience, which have been further developed through our collaboration with Enel, confirm that if we look at Italy in a different light, we can discover things that others do not see. This is also true for robotic technologies, which already provide a contribution to a number of major Made in Italy supply chains, including food, fashion, wood/furniture and mechanics. The challenges of the future also play a key role, the need to tackle the climate crisis first and foremost, with an approach that combines empathy and technology. The 100 experiences described in the report demonstrate that if Italy stays true to itself, it can overcome any challenge placed in its path, thanks to the country’s ability to combine functionality, beauty and humanism, the product of a culture that even in the depths of the most advanced technological challenges, does not lose sight of the quest for an economy and a society that exist on a human scale, as we say in the Assisi manifesto.’

Francesco Starace, CEO of Enel, provides the following clarification: ‘Working in partnership with Symbola, our goal is to enhance the precious heritage of excellence that characterises our country, highlighting success stories that are often overlooked and focusing on the talent that is not always recognised, but which together contribute to achieving progress through the implementation of solutions on a human scale. Technology and research are the pillars upon which this study is founded, and which collects 100 positive examples of companies operating in the Made in Italy robotics and automation sector: these are tales of researchers, figures from the academic world and companies who are able to anticipate the future, bearing testament once again to the competitiveness and the cutting-edge nature of the Italian system on the world stage. We firmly believe that our country, and the excellence and skills that it boasts, can serve as an example of sustainable growth on a global level, demonstrating that it is possible to bring the human dimension back to the heart of the economic model, in line with the Assisi manifesto.’

Italian robotics solutions are even being used in space: a number of the technologies used on NASA’s robotic probe InSight, which landed on Mars in 2018, were Made in Italy, and further Italian technologies will be present on the probe used on the ExoMars mission to study the soil of Mars in 2020; these include the Larri retro-reflector hemisphere (Laser Retro-Reflector for InSight) which will provide the position of the lander on the surface of Mars, developed by the National Institute of Nuclear Physics (INFN) with the support of the Italian Space Agency (ASI). So there we have it: technology, innovation, development. A good prospect for the future. The labour market included.