The rediscovery of Ernst Cassirer between utopia and reform, and the “Assisi Manifesto” for a sustainable green economy 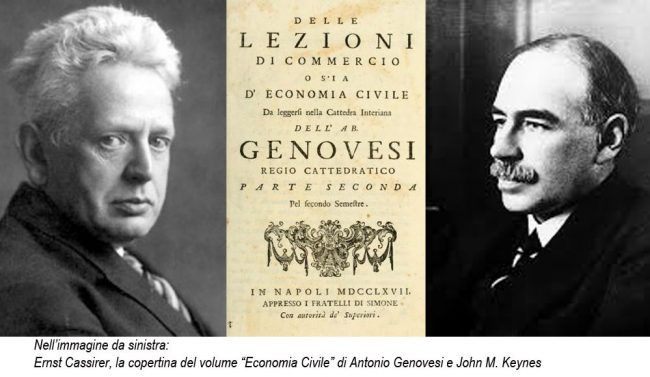 “Rectify the unjust society”, write Alberto Alesina and Francesco Giavazzi, influential liberal economists, on the Corriere della Sera of 27 October. Alesina and Giavazzi examine the market economy but also the need for political and economic choices to try and rectify increasingly unacceptable inequalities. Inequalities between geographical areas, generations, social classes; among people who possess knowledge useful to the digital economy and those other large sections of the population who do not (the growing digital divide affecting a large part of Italian society).

How? This is the central theme of the challenge towards environmental and social sustainability. A challenge posed, with ever greater determination, by scholars within economic, business and trade union circles (as witnessed by Keynes’s reinterpretation on productive public investments and by Antonio Genovesi on the “civil economy”. Also by the works of Krugman, Stiglitz and Fitoussi, with his latest book on The neolanguage of the economy, or, how to tell sick people they are in good health and by the Nobel Prize in Economics, awarded to three scholars, Michael Kremer, Abhijit Banerjee and Esther Duflo, for their research on poverty and the tools to tackle it). Likewise, by moral authorities (Pope Francis’s calls on the “right economy”) and by that growing part of the general public, starting with the Millennial generation and its extreme concern about the risks of environmental destruction.

Alesina and Giavazzi argue that inequalities are particularly unacceptable when accompanied by social immobility, “that is, when the rich remain rich for generations even when doing little or nothing, while the poor remain steeped in poverty even when working hard to leave it”. They propose a tax reform that applies, with intelligence and balance, taxes on inheritance and intra-family donations, while lowering the contributions on the highest incomes (thus freeing up resources for consumption and investments). Donations of inheritance to non-profit organizations (schools, universities, foundations) to support scholarships for children from low-income families should not be taxed. And, in terms of social security, it is necessary to tie the retirement age to life expectancy, to prevent long-term pensions paid to the elderly weighing on the new generations, thus depleting their resources and crushing their hopes (in short, the unjustly reviled ” Fornero reform” was right, while the expensive, unfair “quota 100”reform just causes further imbalances).

These, so far, are the arguments of Alesina and Giavazzi. But there is more to be added. We could think of massive public investments and incentives for private investments in schools and training, as per the long life learning perspective (of which we wrote about in last week’s blog). These would help thousands of people catching up with the changes in knowledge and skills brought on by the evolution of work in the times of “knowledge economy” and the spread of AI (artificial intelligence). And also, choosing economic policies that would benefit business competitiveness, up to now the most suitable way to encourage social mobility (in order to face competition, capable people are employed and rewarded, regardless of their family name, gender, race, cultural and religious opinions).

Choosing sustainability is an ambitious strategy that requires a long-term view and constant reform, together with coherent and incisive measures. A starting point of reference could be derived from one of the greatest philosophers of the twentieth century, Ernst Cassirer: “The great mission of the Utopia is to make room for the possible as opposed to a passive acquiescence in the present actual state of affairs. It is symbolic thought which overcomes the natural inertia of man and endows him with a new ability, the ability constantly to reshape his human universe.”

Political practice, from “symbolic thinking” to action, can take inspiration from the “Assisi Manifesto” “for an economy on a human scale”, announced a few of weeks ago and signed by Ermete Realacci, president of Fondazione Symbola; Vincenzo Boccia, president of Confindustria; Ettore Prandini, president of Coldiretti; Francesco Starace, CEO of Enel; Catia Bastioli, CEO of Novamont (the “green plastics”); Enzo Fortunato, director of the Press Room director for the Sacred Franciscan Convent of Assisi; and other fifty business and culture personalities (among others, Renzo Piano, Francesco Profumo, Enrico Giovannini, Stefano Zamagni, Carlo Sangalli, Carlo Petrini, Maurizio Lusetti, Leonardo Becchetti, as well as this blog’s author). The objective: “Facing the climate crisis with courage”, with choices “that represent a great opportunity to make our economy and our society more human-friendly and therefore more equipped for the future”. Sustainability as a key to high-quality work, life, business competitiveness, and economy.

Realacci affirms: “Italy is far ahead on this path. In many sectors, from industry to agriculture, from crafts to services, from design to research, we are the key players in the field of circular and sustainable economy. We are, for example, first in Europe in terms of waste recycling”, 79% compared to 55% in France and 43% in Germany (“Buone notizie” section from Corriere della Sera of 22 October). The green economy generates 3.1 million jobs, a growing figure, in roles that require a high level of specialization and quality. It stimulates new businesses. It reduces energy costs. It improves companies’ profit and loss accounts . It makes products and services more likely to be accepted by a responsible consumer market. It contributes to the “paradigm shift” that is necessary to steer economic development towards a better environmental and social balance (the “GreenItaly 2019” report by Symbola and Unioncamere, presented yesterday in Rome, reiterates this).

Realacci insists: “Not only extremes like “business as usual” or “a happy recession” should exist. We need a goal to set the energies in motion. And Italy can do a lot, with its culture of civic duty, its businesses spread over the territory and its great social sensitivity “. Utopia and reform. Indeed, in Cassirer’s style.