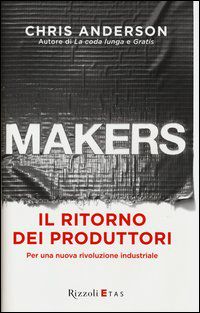 Say goodbye to traditional factories, but not just yet. The end is near and very real, and may be nearer than we think according to some experts, particularly if we consider what is being called “the third industrial revolution”, i.e. that of digital manufacturing. Of course, what’s at stake is not just the future of manufacturing, but also its very culture and the way we think about work and production. It will be a near future for some, distant for many, but definitely one to be studied and better understood.

The latest effort by Chris Anderson – journalist, author, technologist, and editor-in-chief of WIRED until 2012 – is a particularly important read that describes how the next industrial revolution came about and how it is expanding with the arrival and spread of technologies such as 3D printers (i.e. that “print” objects in much the same way as a traditional printer prints on paper). But Makers – The New Industrial Revolution is not just a story of new technology. It is, above all, the story of how this technology could play the same role as the steam engine that brought about the first industrial revolution, but with a difference. This time, Anderson says that individual creativity could again be placed at the heart of the debate surrounding the culture of enterprise.

But Anderson is, first and foremost, a great storyteller, so the book begins with an autobiographical introduction about the work he did in his garage, transforming bits of metal into high-precision components, before moving on to a series of examples of the use of new technologies in design and manufacturing. This ranges from projects such as the Tesla high-performance electric vehicle and Local Motors’ crowd-powered automotive design to 3D Robotics’ remote-controlled drones and Italy’s own Arduino, a microcontroller that promises great things for the ICT world.

Makers is a fascinating, visionary work to be read by those looking to better understand how the very culture of making things could change with the rise of “democratised manufacturing”, i.e. the ability for individuals to produce and sell things using the Internet and new technologies, thereby revolutionising the world of industrial manufacturing as we know it.