Fourteen stories in the present future 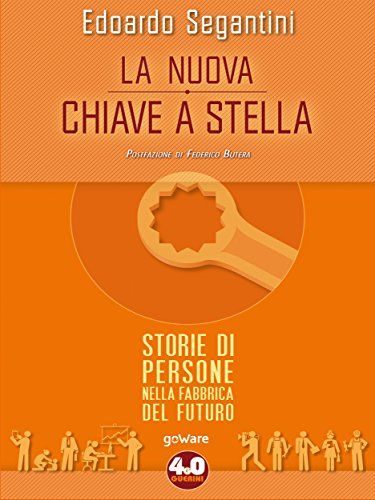 Men and women. And then machines, factories and offices. More than anything else, however, dreams that come true. Multiform companies, never perfect, constantly evolving, always on the go. It is good to see that companies are the result of these elements. Made up of technique but especially of people (entrepreneurs, managers, technicians, workers and employees), production organisations need to be explored. Starting also with the people who populate them.

This is exactly what Edoardo Segantini – long-term journalist, with the Corriere della Sera for many years now, but also with a past in other newspapers – has done with his “La nuova chiave a stella” (The new wrench). An absolute tribute to Primo Levi, the nature of which is clearly understood in the sub-heading: “Storie di persone nella fabbrica del futuro” (Stories of people in the factory of the future). Because the book in fact tells the story of people (men and women) who move around in factories and offices today looking at what might happen tomorrow.

The book (approximately 200 pages long) thus unravels over fourteen stories of the stars of an historical transformation: the Fourth Industrial Revolution. A fact seen through many aspects: not just technological innovation, artificial intelligence, the connected factory, but also a cultural, social and human change that is much more profound and disruptive. All the players have courage and curiosity about change in common. They know how to collaborate with others and react to setbacks. They stay up to date. They feel sympathy for the world.

The philosophy of the book emerges from the words of the same Segantini: “To write this book, I spoke to many people and visited dozens of factories. The aim was not only to see things, even admirable, but rather to understand what they think, how they think, what people who work in the factory of the future want. I investigated fourteen stories that seemed to be the most interesting to me. I didn’t choose the testimonies on the basis of their hierarchical position nor did I go in search of celebrities: I preferred to focus on the lives of undistinguished characters (even though they are distinguished for me)”. The book therefore covers the stories of people who work in major, well-known companies (from FCA to Amazon, via Dallara, Alfa Romeo, CNH Industrial, Poliform, StMicroelectronics) as well as trade union associations. The objective: to narrate the new opportunities and the new impact caused by an earthquake in which man must remain centre stage.

So, stories, but also more. Segantini in fact does not lose sight of the difficult reality of today with the problems linked to unemployment (including technology), the transition times and the need to implement a new set-up of the employment market. For the author, the very same stories contained in this book could indicate a possible future and therefore a possible way to go.

To be read with extra attention, subsequently, is the interview that the same Segantini had with Levi in 1984.