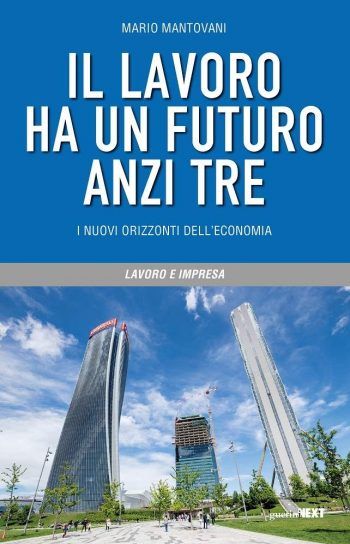 In the face of the strong technological change that is under way, jobs must, in turn, change profoundly and quickly. But that’s not to say they should disappear. However, it is necessary to have new tools for analysis, knowledge and action. Il lavoro ha un futuro anzi tre. I nuovi orizzonti dell’economia (‘multiple futures in work: the new horizons of the economy’), written by Mario Mantovani, is a good read for beginning to understand more about a complex subject like the link between innovation, technological change and workplaces.

Drawing on his experience in different business situations, all connected by crises and accelerated growth, Mantovani is of the idea that work is the epicentre of the great transformations taking place. According to Mantovani, the social and economic changes that are already under way are bringing an era to a close, one in which the contemporary concept of work has been structured, defined and has assumed a central role in the economic model, which can be correctly defined as ‘labour capital.’ Now, completely new and diversified horizons are opening, based on their time of evolution.

Mantovani proposes three scenarios. The first is in the immediate future (i.e. the next five years), the second in the ‘contemporary future’ (which covers the next 50 years) and the third in what is referred to as the ‘era of access’. Each step is defined by a different situation. In the first horizon, the foundations of a regulatory and organisational transformation must be laid, centred on the concept of ‘organised labour,’ overcoming the distinction between dependent and autonomous jobs. In the ‘contemporary future,’ in which the ‘robotic era’ will begin, the crucial point is the relationship between the technological revolution and the risks of work crises (with all the possible consequences on society). Here the author reveals a scenario referred to as the ‘great separation’ between human and cybernetic organisations, that could pave the way for a potential crisis, mainly driven by more accentuated regional imbalances, which are destined to create the third future scenario, the so-called ‘era of access,’ in which new economic models could replace current ones. These models should strive to look at man in his entirety and in a way that is compatible with technology 4.0 and beyond.

The approximately 200 pages of text are not always easy to read. They need attention and sensitivity, but they are certainly interesting. Mario Mantovani’s book has one great merit: it does not provide pre-packaged solutions, but raises issues and problems in a clear and open manner. On the other hand, this is precisely the objective: to reason and discuss, in order to increase the reader’s informed awareness, which it is really the main tool for understanding where we are and where we are going.