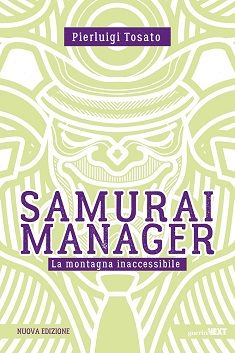 A good entrepreneur never works alone. And a good company can only be built if it is an adventure that hinges on humans. A fusion of calculations and feelings is what gives birth to that culture of producing that can turn a production organisation into something greater. It becomes a production mechanism that is not steady but resilient, not rigid but flexible, not built solely from cold calculations but also from ardent human feelings. Learning the stories of companies that exemplify these principles is a useful lesson. For this reason, we suggest reading the new edition of Samurai Manager. La montagna inaccessibile (Samurai Manager. The Unreachable Mountain) written by Pierluigi Tosato. The book is based on his experience as an international manager, first at Zoppas Industries before moving to Interpump and Global Garden Products SA, then to Acqua Minerale San Benedetto and presently DeOleo SA, the Spanish olive oil multinational that carries the brands Bertolli and Carapelli.

As a paradigm for his managerial activities, Tosato chose the Samurai, understood as the catalyst of energy that is synthesised by a circumstance. When ‘all minds coincide, energies become harmonised and when energy is harmonised, strength is single-minded and identical’. The author has sought to transmit this ‘work method’ to the companies where he has worked, whose stories he narrates in his book.

The result is the story of a multi-faceted adventure rich in challenges and daring, running parallel with management guidance to further a company’s success.  The book thus comments on a range of subjects: the existential crises of a manager, the need to seek perfection, the observation that companies in decline are led by ‘negative managers’, the good that comes from resiliency, the need to have faith in oneself, building a ‘shared vision” and the importance of ‘starting from the Person’.

Tosato’s book should be read attentively despite it being a quick read. It is not a management guide, nor is it the memoir of a manager who stands out from the crowd. It is a bit of all this and much more. It is a book that combines – with skill and readability – concepts and experience that are the cornerstones of good company management (with examples ranging from Toyota to Coca Cola, from Nestlé to Apple, etc.). He also shares ideas and suggestions deriving from philosophy and major works of literature. Names such as Kant, Plato, da Vinci, Dostoevsky, Bulgakov, García Márquez, Pessoa and Yourcenar, to list only a few, are cited more frequently than those of the “gurus” of economics or management.

In the final chapters, and running through all the pages, emerge the basic notions underlying the book: today’s world suffers from the disease of narcissism, the very concept of success is observed through the distorted lens of individualism and short-term gains at any cost. The cure for narcissism implies moving from Me to All, from alienation to authenticity, from ephemeral domination of people and things to the attainment of a shared value.

Readers do not necessarily have to agree with all that Tosato says, but they will certainly feel the need to think over his words.