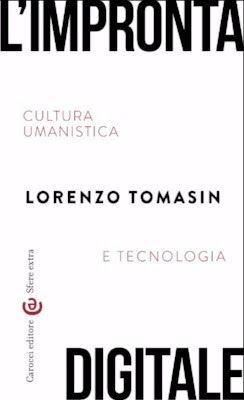 Company culture builds up over time and through the incorporation of influences from inside and outside the company. Humanity and technology together in an ever-changing combination. Humanistic knowledge and technological expertise brought together to generate something unique for every manufacturing organisation. And it is precisely from this balance of the combination between technology (digital nowadays, mechanical previously) and humanism that every good manufacturing culture takes shape. One which is closely “knotted” into the general culture of the time. Understanding the knots tying cultures together is therefore fundamental. And to help us in this understanding we can read “L’impronta digitale. Cultura umanistica e tecnologia” (The digital footprint. Humanistic culture and technology) by Lorenzo Tomasin.

The book investigates the links between digital technology and humanistic culture. Encounters, rather than links, in fact. Ones which take shape as soon as new technologies for tools become objectives themselves which distort correct human reasoning. A theme which underpins the pages of Tomasin (who teaches Romance Philology and History of the Italian Language in Lausanne), is the observation that technology is profoundly influencing humanistic culture: from basic training to advanced research, it offers not only precious tools for services to science, and to human sciences in particular, but in many cases also has a tendency to rewrite scientific targets and languages, by putting forward for discussion their role in society and in the system of human knowledge.Rather than the profitable utilisation of every discipline, technology positions itself – as mentioned previously -, as the objective or focus of the cultural debate.

In order to demonstrate all this, the author compares in seven chapters an equal number of aspects of the encounter/clash between digital technologies and ordinary human experience. He reviews rapidly (but in no way superficially) subjects such as the role of the Internet and of the Web, the relationship between the digitalisation of information and books, the role and the power of acronyms, the extension of the use of English, the difficulties facing “literary studies” and the relationship between the past and the present.The author does not suggest recourse to technophobia as a solution, but an alternative route whereby technology is restored as a tool.

Tomasin writes well and with great insight, captures the attention of the reader, but requires a degree of concentration: his pages take things at a brisk pace but cannot be read too quickly.

It may seem short (little more than a hundred pages), but what Tomasin has written should be savoured at leisure and will certainly also help a company culture to develop in a better way.