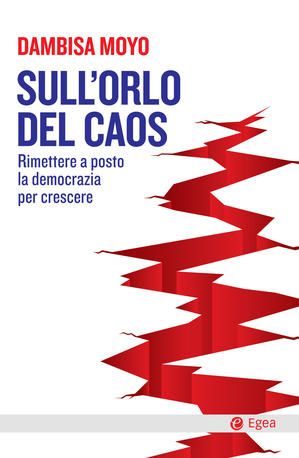 An awareness of where we are. And of where we are heading. We have told ourselves this on many occasions, but it is worthwhile repeating it. It is a good idea for everyone – citizens, entrepreneurs, managers, workers, employees –, to equip themselves with the tools to understand where we stand and in what direction we are moving. This is not simply a matter of civil conscience, but something much more wide-ranging. Which has many implications. And those who are in charge of businesses should have tools for analysis and knowledge which are if possible even more sophisticated. This is the case of “Sull’orlo del caos. Rimettere a posto la democrazia per crescere” (Edge of Chaos. Why democracy is failing to deliver economic growth, and how to fix it), written by Dambisa Moyo (an economist and essayist, who is interested in macroeconomic ideas and international affairs) which has just been translated into Italian.

The book is not just a vast fresco of the situation in which the world finds itself (on the edge of chaos, precisely), but also a loud cry to find (all) the best ways towards an economic boost and growth for which everyone (citizens and businesses) feels the need, but in whose direction we seem to have lost our way. A generation after the fall of the Berlin Wall – explains Moyo –, the world is once again on the brink of chaos. Protests and revolts are growing in numbers, the author tells us, but it seems that they all have a common feature: the population is asking their governments to do more to improve their lives and to do it quickly. However, she points out straight afterwards, in the present conditions of “anaemic” growth, the political powers that be are not in a position to offer them any solution whatsoever. The increasing inequalities in income and a stagnating economy represent a threat both for the developed world and for the developing nations, and our political leaders can no longer permit themselves to ignore the storm already looming on the horizon.

Moyo then turns her reasoning to the analysis of the history and economic events of recent years by examining in greater depth the concept of growth, and by studying protectionist tendencies, and the evolution of the applications of democracy. In this way she goes on to identify “four headwinds”:  demographics, inequalities, the scarcity of raw materials, and technological innovation. It is from the combination of these factors that the current chaos is being created, as is the difficulty in mastering it.

Yet Moyo’s text does not abandon any positive vision for our future.  Economic growth is essential for global stability – she explains –, but today’s liberal democracies are no longer able to generate it. We should not, however, resign ourselves to embarking upon a course which leads us away from democracy, Moyo affirms, but rather we should radically reform democracy itself.

The book by Dambisa Moyo should be read with an open mind. Its views cannot always be shared by everyone. But this is not the point. What is much more important is what is contained in just over 200 pages of text: a message of hope about the ability of the world to redeem itself. A message which is valid for everyone.

Sull’orlo del caos. Rimettere a posto la democrazia per crescere (Edge of chaos. Why democracy is failing to deliver economic growth, and how to fix it)