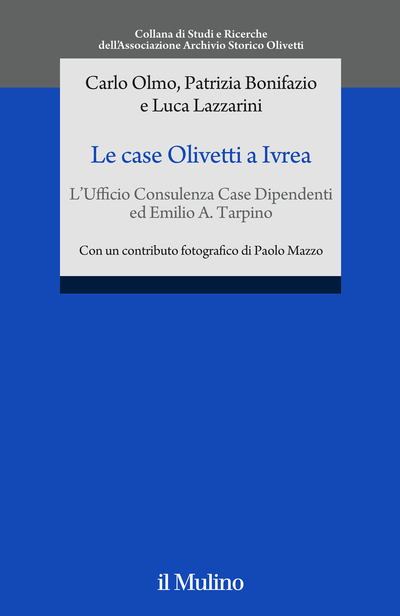 The company holds a place right next to the worker. Not a false pretence of caring, but something different. Something that can be complicated to explain and interpret. Something that is expressed in ways that differ even though they share common features. Analysing what we now call corporate welfare or corporate social responsibility (depending on the case), is both a good thing and quite useful: it helps us understand important aspects of the corporate culture in production organisations.

This is why we should read Le case Olivetti a Ivrea. L’Ufficio Consulenza Case Dipendenti e Emilio A. Tarpino (The Olivetti houses in Ivrea. The Employee Housing Advisory Office and Emilio A. Tarpino) written by Carlo Olmo, Patrizia Bonifazio and Luca Lazzarini (the first is an architect and architectural historian, and the others are architects and urban planners), with photos by Paolo Mazzo. The book was written following research carried out at the Olivetti Historical Archive Association and other public and private archives. It takes a look at the employee housing programme that the company set up in Ivrea, with particular focus on the role of the Olivetti Employee Housing Advisory Office, managed by the architect Emilio A. Tarpino.

The authors examine the design models and political choices that Olivetti made during an important period of its history. These choices demonstrate the variety of people and cultures – including technical ones – that played a part in shaping Ivrea’s residential landscape. The town underwent a unique modernisation process, where social services were placed at the heart of factory life and drew international attention to the “Olivetti case”. The factory-community became a model. In short, this is the story of a crucial aspect of the company-community, which was perhaps unique in the modern industrial history, both in Italy and abroad. The company was intimately linked to the region and its people, whilst developing modern technologies that placed it at the top of the market for years. It remained that way until a change in the cultural climate, inside and outside the factory, changed the focus and goals of production.

Following a forward by Olmo, the book describes the setting and the context that link home and region, before moving onto the story of how the links between company, architecture and region developed over the years. It then takes a deeper look at the business operations and the work carried out by the Employee Housing Advisory Office, and it includes illustrations of floor plans and design drawings. A series of photographs of the Olivetti homes in Ivrea and documents complete the volume, helping to give a better understanding of the what took place.

The work by Olmo, Bonifazio and Lazzarini is not just a book on architecture: it is a journey into events that can teach us a great deal. Above all, it illustrates how corporate culture – in the form of employee housing – which seems so far from the heart of production, can deliver levels of excellence in an industry.