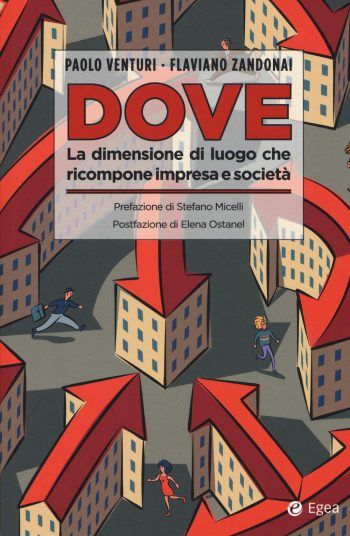 Workplaces. As such, these are places shared by communities of men and women bound by the same destiny (albeit only as regards production).  These are places of shared purpose and of an entrepreneurial vision that develop into productive organisations and come alive with the work of many. It is one of the apparently paradoxical findings that can be arrived at by observing the productive systems of today. In the era of globalisation, digitalisation and immaterial labour, value is once again attributed to where production takes place. This not just the result of transient fashions linked to specific manufacturing sectors, factory locations are also being rediscovered. The importance of the local and community dimension of production is increasing too.

It is around this collection of ideas that Dove. La dimensione di luogo che ricompone impresa e società (Where. The character of a place that brings together business and society) gravitates. The book was co-written by Paolo Venturi and Flaviano Zandonai, respectively Director of AICCON, Centre for Studies on Non-Profits and Cooperation at the University of Bologna, and sociologist who has focused on the tertiary sector and social enterprise for over twenty years.

The concept behind the book is simple: the local areas, neighbourhoods and suburbs are privileged places for experimenting with social innovations, which leads to the creation of significant stimuli for development and well-being. Indeed, today as never before, the creation of value is taking place at the local level and the destiny of businesses is linked to that of the area where they operate. The manifestation of the culture of production rooted in well-defined geographical locations is enjoying its golden moment.

According to Venturi and Zandonai, obviously, putting together physical places, people, markets, companies and major global movements is not a simple matter but rather a challenge that places value in vision, social relations, material products and immaterial resources, infrastructural conditions and political regulations. The “where” to live and produce is thus determined, says the book, by the combination of openness and cohesion that make the difference because they act as generative mechanisms of new social infrastructures capable of transforming spaces into places and recreating what the authors call the “ecology of relationships”, something essential for communal life and economic development.

The pathway is not automatic, rather it requires assistance. For this reason, the authors propose a three-point manifesto (or three manifestos as explained in the book), aimed respectively at the business world (seen as an educating community), at political decision makers (who are required to pass measures in favour of the communities) and at the tertiary sector.

What is outlined by Venturi and Zandonai is a complex framework that isn’t easy but that many will have to deal with, although some will not fully agree. What is described in the book should certainly be given careful consideration.

The two authors write: “It is (…) around the regeneration of places that the decisive action is being played out: a challenge that involves those intangible assets, such as the participation of citizens in the decision-making processes and the social cohesion that today is under attack due to growing inequalities and the tendency for the communities to withdraw. These days, the resentful communities dominate as they display a preference to invest their capital of relationships and trust internally (bonding) and not to expand their connectivity (bridging). Indeed, it is precisely around an open and connected character of social ties that today the game of the “locale” is being played: and not only for companies and institutions but for civil society too.”