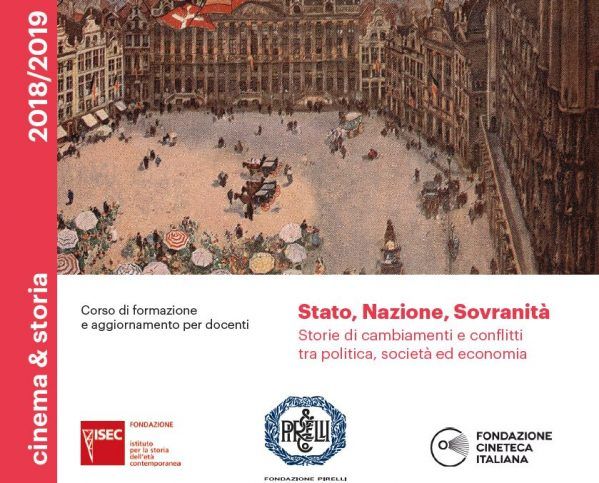 Tackling some aspects of contemporary history in the classroom can be tricky at times, and the Cinema & History course, promoted by the Pirelli Foundation, the Fondazione ISEC (Institute for the Study of Contemporary History) and the Fondazione Cineteca Italiana, has been an educational mainstay for secondary school teachers for the past seven years. A new course for 2019, entitled “State, Nation, Sovereignty: Change and Conflict in Politics, Society, and the Economy”, examined the experience of nation states and their rise and fall in history, in the light of the globalisation processes currently under way.

The course came in the form of four lectures and guided tours at the Pirelli Foundation, three film screenings at the Museo Interattivo del Cinema (MIC) and a closing workshop at the Fondazione ISEC.

The first lecture held by Marco Meriggi, a professor at the University of Naples, investigated the historical cycle of the contemporary state and was followed by Wolfgang Becker’s film Goodbye Lenin.

Nationalisms in the nineteenth and twentieth centuries were examined in a meeting with Alessio Petrizzo of the University of Padua, and the screening that accompanied his lecture was Raoul Peck’s The Young Karl Marx.

Thanks to his professional experience as an international official, Guido Acquaviva was able to describe aspects concerning the state and sovereignty in an age of globalisation. The analysis continued with the third film selected for the teachers: Lucas Belvaux’s This Land is Our Land.

The last lecture, given by Antonio Calabrò, director of the Pirelli Foundation, took a close look at the birth of Europe and open markets from the point of view of Italian businesses also through Pirelli magazine, which was published from 1948 to 1972, and from which some articles on economics and politics were selected:

The final considerations and the focus group of the course were held this afternoon during the workshop organised by the educational section of the Fondazione ISEC.