An “Unknown” Fulvio Bianconi,
A Painter in the Factory
for Pirelli magazine 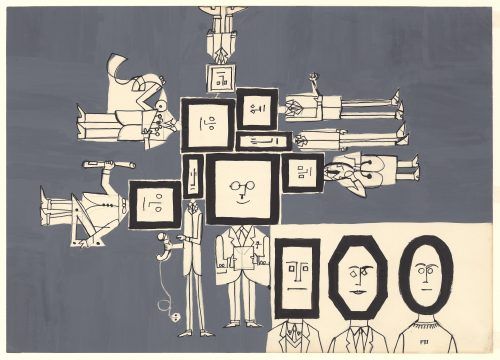 An important voice in the dialogue between scientific and humanistic culture in the pages of Pirelli magazine is that of the artists whose works, together with those of photographers, accompanied the texts of poets, writers, scientists, architects, economists, and journalists, exploring the most diverse subjects in the field of human knowledge. One of the first artists to work with the magazine, as well as on the company’s advertising communication, was Fulvio Bianconi. Born in Padua in 1915, he moved to Milan in the 1930s. Here, thanks to his encounter with Cesare Zavattini, a key figure for artists and intellectuals who had “emigrated” to Milan, he began working as a graphic designer and illustrator for what were then the leading companies in Milan.

He started working with Pirelli in 1949, probably called in by Leonardo Sinisgalli, the creator and first editor of the magazine, where he created illustrations for articles entitled “The fire fly” and “When you learn to fly” in 1949 and advertisements for Pirelli Sapsa mattresses, as well as for the elastic luggage strap in 1950. After creating pen-and-ink drawings to illustrate “The muse in the wheels”, an article by Giansiro Ferrata on the final of the Gran Premio Pirelli in 1954, and an article written in 1955 by Armando Stefani on the history of balls, in the second half of the 1950s Fulvio Bianconi made his mark with a new genre in the magazine – that of “factory visits”. Along the lines of the examples that had already appeared in Civiltà delle macchine, the bimonthly magazine of Finmeccanica edited by Sinisgalli from early 1956, a series of articles devoted to the factory and industrial production also began to appear in Pirelli. With the idea of introducing the general public to the processes involved in manufacturing objects, the various stages of production were taken from life by graphic artists and painters, whose drawings were used to illustrate and embellish popular and educational texts on manufacturing methods. Fulvio Bianconi worked on illustrating the magazine with India ink drawings, and others in bright colours, showing the machines and processes involved in making Pirelli products: tennis balls and electric cables in 1956, tyres, raincoats, toys, pipes, boats and, lastly, in 1959, Lastex yarn.

Recently restored, two previously unpublished drawings by Bianconi, from the series on visits to factory, now enrich the Historical Archive. The drawings are made with ink and coloured chalks and show the production of toys in the Pirelli Rempel collection (1957) and the manufacture of Resivite pipes at the Azienda Articoli Tecnici plant (1958), made during a visit to the factories. In addition to these is a third drawing in tempera, pen and ink, and graphite, made in 1962 to illustrate an article devoted to management training. This was Bianconi’s last assignment for the magazine. In the 1960s, painters in the factory again came to the fore in Pirelli magazine with great new artists: the painters Ernesto Treccani’s and Giancarlo Cazzaniga’s painted images and words told of their personal experiences in the factory.