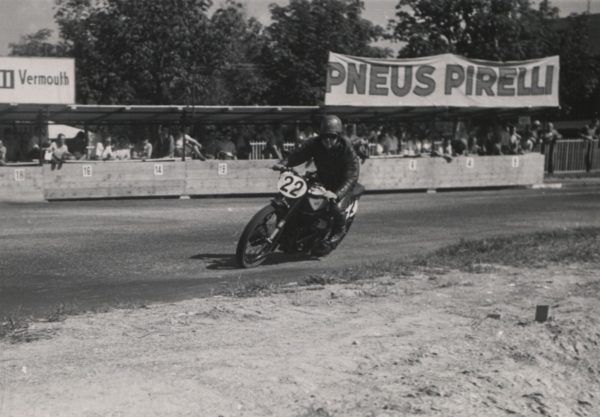 EICMA 2019, the Milan International Bicycle and Motorcycle Exhibition, came to an end yesterday and, to mark the occasion, the Pirelli Foundation has placed a splendid series of photographs in the Historical Archive section of its website, with hundreds of shots showing the exhilarating world of motorcycle racing. The photos include many fascinating portraits of champions of yesteryear – men who wrote the history of this perilous but thrilling sport right from the early days of the twentieth century.

We see Erminio Visioli’s enigmatic expression just after winning the Circuito delle Tre Regioni in August 1921 on his Pirelli-shod Harley-Davidson 1000, just a week after his victory in the historic uphill Como-Brunate race. Wearing a crewneck sweater and Scottish beret – in August! – Erminio Visioli looks straight at Strazza, the photographer for La Stampa Sportiva, the newspaper that devoted a triumphant article to him. This photo, now in our Historical Archive, is one of many that can be viewed online as from today.

Alongside Visioli’s smile, we find the “tough guy” look of Miro Maffeis, the “bel Miro”, who was so adored by the girls. Maffeis knew every inch of the eight hundred kilometres of the Raid Nord-Sud, from Milan to Naples: He had won it in 1920 on his Indian 500, and took third place in 1925 on a Bianchi 350, which was enough to earn him a reputation as a champion. And then, of course, there is the great Tazio Nuvolari, “the incarnation of the devil” as some saw him, even before becoming the “Flying Mantuan”. Nuvolari, who would let go of his brakes when coming down from the Ghisallo Pass: when he needed to turn, he would run his (padded) elbow against the walls of the houses along the road, using them as a pivot to suddenly change direction and start shooting off again. Ahead of everyone else, needless to say, on his Bianchi 350 Freccia Celeste fitted with Pirelli Motocord tyres. In one photo we see him with his companions in the Bianchi team: all of them in uniform, except for him, of course. A proud, haughty look can be seen on the face of the driver-engineer Piero Taruffi, who in 1937 set an extraordinary series of speed records on the motorway between Bergamo and Brescia on the Gilera Rondine bike with aerodynamic fairings he made himself, fitted with “ultralight ribbed S” Pirelli tyres.

Raffaele Alberti, in a photo of 1948, rests his hand on the saddle of his “Guzzino” and puts on a serious, martial look. To tell the truth, it was not so much a “saddle” as a thin foam rubber mat he would lie on, facing forward, on his way towards the 1 kilometre speed record from a standing start. Alberti clocked up four in a row in February 1948, on the Charrette-Saxon circuit in Switzerland. and then another nineteen in Monza, in November, together with Gianni Leoni and Bruno Ruffo. Breaking records over the kilometre, over 500 miles, the hour, and twelve hours, winning all the way: on his Guzzi 65 – raised to 73cc but forever a “Guzzino”. He never abandoned his Pirelli tyres. What you can see today is not just a gallery of historic photos, but a story made up of looks and eyes, and expressions of a legendary world.