Skyscraper Stories
The Pirellone and a Sixty-year Celebration of Corporate Culture and the Regional Government of Lombardy. 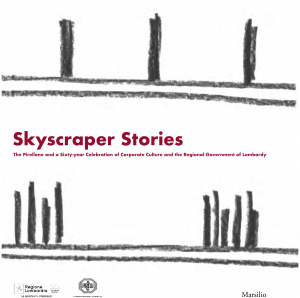 On 4 April 1960, the Pirelli Skyscraper was opened in Milan as the headquarters of Pirelli, which at that time was writing one of the finest chapters in the renaissance that enabled Italy to overcome the destruction of the Second World War and to become a major player on the international stage. The story of the Skyscraper, which was commissioned by Alberto and Piero Pirelli and given form by the creative and innovative spirit of Gio Ponti, Antonio Fornaroli, Alberto Rosselli, Pier Luigi Nervi, Arturo Danusso, Giuseppe Valtolina, and Egidio Dell’Orto, is brought to life in the book published by Marsilio. It gives voice to those who thought up, designed and built it, and to those citizens of Milan who have inhabited and lived it over the past sixty years. It is a celebration of the modernity of technology and industry in Lombardy, of the creation of the regional government, which has had its headquarters here since 1978, and of the avant-garde urban planning of the city.

The institutional prefaces by Attilio Fontana, Alessandro Fermi and Marco Tronchetti Provera are followed by in-depth essays on economic and social history and architecture penned by Antonio Calabrò, Alessandro Colombo and Laura Riboldi, and an interview with Piero Bassetti, the first president of the Lombardy Region.

A timeline retraces more than sixty years of the history of the city and its culture, its companies and its institutions, against the backdrop of the broader history of Italy and the world, together with a look at the future of the metropolis. At the heart of the book is a wealth of illustrations, with photographs, images and other original documents from the Historical Archive of the Pirelli Foundation and of the Lombardy Region; photos by such great names as the photographer Arno Hammacher, Aldo Ballo, Giorgio Calcagni, De Paoli, Paolo Monti, and Dino Sala, and by historic agencies such as Publifoto, as well as advertising campaigns by internationally renowned designers such as Lora Lamm, Riccardo Manzi, Alessandro Mendini, Bruno Munari, Bob Noorda, Pino Tovaglia, and Massimo Vignelli, who were leading lights in the cultural and artistic ferment that swept through Milan in the 1960s.

The Skyscraper remains one of the landmarks of a metropolis that is now committed to adopting a sustainable, environmental and social approach to development. Its history has been reconstructed by listening to ten voices – those of Piero Bassetti, Eva Cantarella, Alessandro Fermi, Attilio Fontana, Giuseppe Guzzetti, Uliano Lucas, Carlo Ratti, Gianfelice Rocca, Andrée Ruth Shammah, and Marco Tronchetti Provera – women and men from the worlds of politics, culture and the economy. With their memories and predictions, their words give us a view of a territory that has gone through moments of enormous difficulty but one that, despite everything, has never lost its ability to dream and hope, to plan and build. To work.

We thus see the first industrialisation and the rise of businesses and modernity, the architecture and construction of the building, bringing to life the interiors and the design, as well as work inside the Skyscraper. And we are also taken through a Milan on the move, with the culture and fashion of the 1960s and 1970s, the creation of the regions, the arrival of the Lombardy Region and the Regional Council, with all their various activities, ending with a view of the future, from past memories to the design of the cities of tomorrow.

Skyscraper Stories
A story in five acts,
from industrial culture to the institutional
activities of Lombardy Region
Go to website

A digital event to discover the “Skyscraper Stories”
Skyscraper Stories. The Pirellone and a Sixty-year Celebration of Corporate and the Regional Government of Lombardy
Gio Ponti and Pirelli: architecture and design
Load more