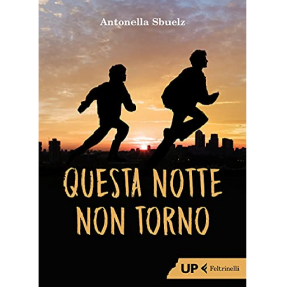 I’m not going back tonight

We are in Udine. Mattia is 15 years old and lives a carefree life, apart from his grandfather's recent death and his crush on Sofia who does not seem to notice his shy approaches. Then, one evening, on his way back home, he discovers that his parents are separating and runs away to his secret hideaway: the school basement. However, by a hedge he meets Aziz, a boy, alone and starving, from Afghanistan who is running away from his country, who had to leave his father at the border with Hungary (without knowing what might happen to him) and who saw his mother die during an American raid against terrorists. Mattia takes him in, shares what food he has but, during the night, the boy starts running a very high fever and while taking care of him, Mattia discover Aziz's true identity – he is not at all who we think he is. While Antonella Sbuelz's previous novels were pervaded by an overwhelming love for the history of north-east Italy, here the author expresses a different urge: a need to talk to children about inclusion, illegal and mishandled immigration, broken families (though in different ways) and, above all, humanity. Chapter after chapter, the voices of the two protagonists alternate to share thoughts, hopes and sorrows arising from two worlds that seem very different only because unknown to each other. Through a dense and occasionally poetic style, Antonella Sbuelz does not hesitate to include that bluntness typical of adolescence, a period when it is often difficult to take stock and contextualise real-life events. Thus, the intense dialogue between Mattia and Aziz steers the former towards a new level of awareness, and we reach an unexpected ending, poignant to the very last word, concluding a story that, among twists and turns, leads to some touching discoveries. Questa notte non torno (I'm not going back tonight) by Antonella Sbuelz Feltrinelli, 2021