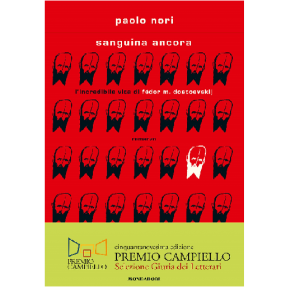 Paolo Nori still vividly remembers the moment when, as a boy, he discovered Fyodor Dostoevsky's Crime and Punishment. He remembers how amazed he was, and how it sent the blood coursing through his veins: it was an authentic epiphany. A wound opened within him that day, and decades later it still bleeds. Nori's novel is a love letter not just to Dostoevsky but to all Russian literature of the nineteenth century – since there was none before Pushkin. It simply did not exist. In a very engaging way, he tells us the story of Dostoevsky's life and works, but also of his relationships with the other great writers of his day. With authors such as Pushkin, Gogol, Turgenev, Tolstoy and many others, and he shares with us the greatest passion of his life, which led him to study Russian and then to teach it and become its translator. His novel is not a linear biography, for it is partly an essay, a "book that thinks it’s a novel" and he also speaks to us about his own personal relationship with the books of the great Russian writer, reminding us why Dostoevsky is still worth reading - and rereading - today. And the book attempts to answer Paolo Nori's own personal question: why does it still bleed? Sanguina ancora. La straordinaria vita di Fëdor M. Dostoevskij Paolo Nori Mondadori, 2021