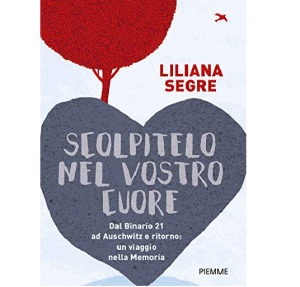 Engrave it in your heart

As a child she was thrown out of school once the Italian racial laws came into effect, as a teenager she was deported from the infamous Platform 21 in Milan, as a girl she survived in a concentration camp, and now she is Senator for Life of the Italian Republic, as well as a mother and grandmother. Liliana Segre and her fundamental message cannot be summarised in just a few words, although she did succeed, in just a few sharp and unyielding words, in describing the hell that was Auschwitz, while also living through the stage of denial about death camps that followed World War II. For years, with great strength and emotional effort, without ever playing down events that had been harsh, painful and horrifying, she shared her words as a survivor, not only with adults who wanted to listen to her, but also, and above all, with children, persuaded that alert eyes and “outposts of peace” – our children – are what is needed to fight hate, fear or indifference to injustice and racism in its every form. Scolpitelo nel vostro cuore will be the last work by Senator Segre who, a few months ago, stated that she wanted to “let that hurt, humiliated Jewish child go” and just live in the present, with her family. A slim book with a significantly vast meaning, as it contains her account as a survivor, the words that, for years, she has been using to narrate it to those who chose, or were lucky enough, to hear them. What is most moving is the significance and the weight of those words, as well as her choice to commit them to writing, making them more powerful and everlasting than that “Arbeit macht frei” or the tattoos that stripped those arriving at the extermination camps of their dignity. And to those words, she attaches a great message of hope, resilience and forgiveness: “Never say that you can't make it, it's not true. We all have an incredible strength and we all are responsible for ourselves. In life, we need to keep on walking, one leg after the other. The march that awaits you is a march for life. This is what I'd like you to know.” Scolpitelo nel vostro cuore (Engrave it in your heart) by Liliana Segre Edizioni Piemme, 2018