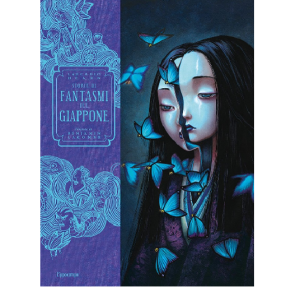 Benjamin Lacombe, one of the best-known contemporary French illustrators, pays tribute to the stories of the Greek-Irish writer Hearn Lafcadio, who in the early twentieth century moved to Japan, where he got married, acquired Japanese citizenship, and changed his name to Yakumo Koizumi. His love for the traditions of his adopted country led him to travel around and study the myths and legends handed down from generation to generation. The ghost stories, also known as Kwaidan, that are published in this volume draw inspiration from these oral stories of Japanese folklore. Some of them have already appeared in Italian in Ombre Giapponesi, published by Adelphi, while others are presented here for the first time. Lacombe translates Lafcadio’s work into images, reproducing the atmospheres of his stories in a dark, visionary manner, in a book that is a must for all lovers of spine-chilling tales and Japanese culture. Storie di fantasmi del Giappone Hearn Lafcadio ; illustrato da Benjamin Lacombe L’Ippocampo, 2021