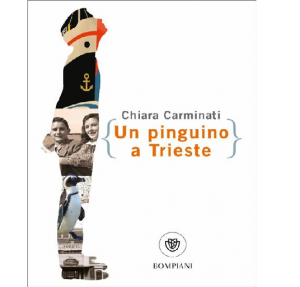 A Penguin in Trieste

March, 1953. There are a lot of things that Nicolò, 15, doesn't know about his father. He doesn't know where he is, first and foremost: in a prison camp in Eritrea? That's what they say. But the war is over and he hasn't come back. The only thing that he has left is a wooden penguin. When a newspaper article presents him with another option, Nicolò doesn't hesitate to take a job as steward's assistant on the ship Europa, bound for South Africa, in order to pursue it. On board and ashore, alone and stubborn, he faces a journey which will expose him to all his fears, until he comes face to face with a man ravaged by pain. Treading the line between historical fact and fiction, real life and imagination, Chiara Carminati's novel skilfully weaves together the story of a penguin named Marco who arrives in Trieste to spend the rest of his life pampered by all those around him, and the history of the city itself, suspended between Italy and Yugoslavia, and claimed by both sides. A novel of bonds as strong as wood, like a penguin patiently carved by a missing man, and as indestructible as love, which never loses its intensity. Even after fifteen years or eight thousand kilometres, and even when you must step into the eye of the storm in order to reclaim it, taking a journey through yourself and your darkest fears. Un pinguino a Trieste Chiara Carminati Bompiani, 2021