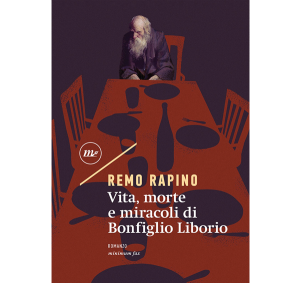 The Life, Death, and Miracles of Bonfiglio Liborio

Bonfiglio Liborio has come a long way, from the little unnamed village of his youth, where he grew up working as a ropemaker, and then as a barber. After doing military service, he leaves for Milan, because he has read in a newspaper that they’re looking for workers there. Among other things, he ends up in a mental hospital and, years later, he returns to his village, where the people say he’s a “cocciamatte”, or madcap. Now in his eighties, Liborio picks up a black Bic ballpoint and a notebook with nice straight lines and decides to tell the story of his life. He starts with the father, whom he never knew but whose eyes he is said to have inherited. Memories spanning almost a century of life and of the history of Italy, at times somewhat confused, such as his recollections of the war, which are “so jumbled up that you couldn’t line them up even just for fun, not even if you called in a good surveyor”. Remo Rapino writes his story in a language that mixes together Italian, dialectal expressions, slang, and made-up words. Rapino’s Liborio is a reject who lives on the margins of society, one of those figures who inhabit the gaps in history, who move around in a world that appears not even to notice them. Let's discover the book together with the author in this video dedicated to Pirelli readers, Vita, morte e miracoli di Bonfiglio Liborio Remo Rapino Minimum Fax, 2019