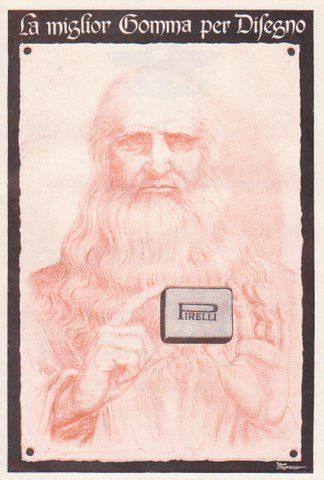 An exhibition devoted to the trio of Italian genius opened on 16 June at the Villa Farnesina in Rome, as part of a series of events promoted by the Accademia dei Lincei to celebrate the anniversaries of Leonardo (2019), Raphael (2020) and Dante (2021). In a display of postcards, works, objects, magazines and newspapers from a hundred years ago, the exhibition explores the tastes and aesthetics of the celebrations of the anniversaries of Leonardo (1919), Raphael (1920) and Dante (1921). In the years immediately following the First World War, when Italy was attempting to rebuild its own national identity, the three great masters were hailed as a source of inspiration for young artists. They also became models for a new way of looking to the future, in a spirit of innovation and change, involving every sphere of human action and reaching out to the entire population through postcards, objects, furniture, architecture, and magazine and newspaper covers.

In particular, the first section of the exhibition looked at Leonardo, with references to the great inventions of which the genius from Vinci was considered to be a precursor – such as aircraft, which came to the fore in the Aeropainting of the 1920s – together with the equestrian monuments made by artists to illustrate scenes from the Great War, and anatomical studies. One of these works, a Pirelli advertisement featuring the great artist-inventor, is also on display.

Leonardo, the perfect embodiment of art and industry, thus became a sort of special endorser, chosen by Pirelli in 1920 to advertise its erasers: a portrait of him in sanguine, fastened to a support by drawing pins, shows him displaying “the best eraser for drawing”, as the slogan puts it. Just like a modern influencer, Leonardo da Vinci advises us to buy Pirelli erasers. As we can see in the catalogues of the time, now preserved at the Pirelli Foundation, these erasers were all marked with the Long P and a star, and were available in ten different shapes, as well as in the dual ink/pencil type.