Music Returns to the Factory 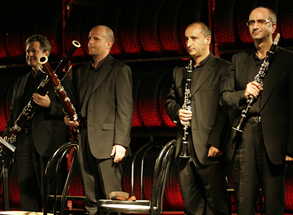 Music returns to the factory. More than four hundred people attended the concert of I Fiati di Torino promoted by the Pirelli Foundation within the scope of the MiTo exhibit – an audience that gave life back, for one evening, to the factory in Via Torino (Settimo Torinese), which is being closed down.

But it was far from a requiem. The music of Mozart, Rossini, Beethoven, Bach, Berio, Gabrieli, Saglietti and Stravinsky served as a salute to a factory that is being retired after 56 years of production, to be replaced by new, technologically advanced facilities, which are already under construction just five kilometres away. But the factory is not made only of metal and machines that can be moved or replaced. “The factory is made of people at work. The rapid, skilful movement of their hands.

The motions of the machines. The factory is rhythm. Voices and sounds. All of which give the factory a music all its own. The industry has its own culture, one which can – indeed, must – be found in the buildings of the industry,” said Antonio Calabrò, director of the Pirelli Foundation and Director of Corporate Culture for Pirelli. The audience included a great many current and former Pirelli employees, as well as the mayor of Settimo Torinese, Aldo Corgiat, and Pirelli senior management.

Egidio Pellegrin, Quintilio Di Antonio, Severino Scorzon, retired Pirelli employees, spent forty years of their lives inside the gates at Via Torino. They are filled with emotion when that place of hard work and sweat transforms, for just one night, in the evocative backdrop for a concert of brass instruments, because these are the instruments that best evoke the image of the metal used to make the factory’s machinery. It is a harmonious interplay, one that points to what work can be, must seek to be, even when harmony is difficult to achieve. It is a good example of contemporary corporate culture.

There is a European tradition uniting music and the workplace. In Vienna at the turn of the century with concerts for workers – classical music for a new audience, different from the traditional bourgeois concert goer, and compositions contemporary to those times. As well as in Italy in the 60s and 70s, with musicians such as Luigi Nono, Claudio Abbado and Maurizio Pollini – different sensitivities and different experiences in order to “brighten up the factory”.

The musicians took the stage at 7:00pm. Forming the backdrop for the ensemble were pallets full of tyres, which helped with the acoustics of the space. The music of Mozart’s The Magic Flute and a fugue by Bach seemed, for a moment, to come from the factory itself.