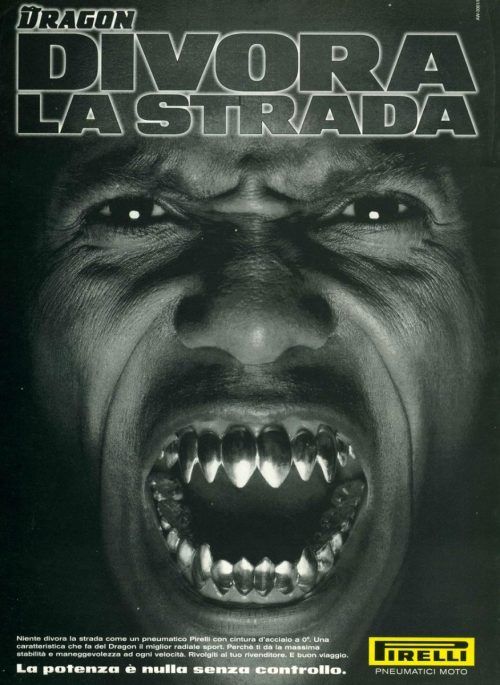 This is not the first time that the Scottish photographer Albert Watson, the creator of The Cal 2019, has worked with Pirelli. Before immortalising the models Laetitia Casta and Gigi Hadid for the pages of the cult-status Calendar – which is being unveiled today to the public around the world – the Edinburgh-born master had already taken brilliant, iconic shots for a Pirelli advertising campaign. This was back in 1996, when the subject portrayed was the explosive “son of the wind” Carl Lewis. Many will remember the famous photo by Annie Leibowitz – who was herself the creator of some editions of the Calendar – showing the American sprinter preparing to take off while wearing a pair of dizzyingly high-heeled red shoes, bringing to life the famous slogan “Power is nothing without control”. It was 1994 and Lewis had taken over the role of “global” endorser of the Pirelli Group: a couple of years later he would hand over the baton to the Olympic record-holder Marie-José Pérec, who played herself as a legend of power and beauty in the advertisement directed by Gerard de Thame. In Watson’s shots, however, Carl Lewis became a sort of wild beast ready to devour the road with his teeth of steel, or to maul his prey with sharp, pointed nails. A metaphor that associated the characteristics of the product with those of the endorser: the “devourer of roads” is the Pirelli Diablo, the extremely sporty motorbike tyre, while the aggressive bird of prey is the off-road MT80 RS. Two years later, another athlete would act as himself in a famous advertising campaign: the Inter Milan footballer Ronaldo,  who was portrayed as Christ the Redeemer in Rio de Janeiro by the English photographer Ken Griffiths in 1998, was an icon of the “controversial and unexpected” advertising in line with the Group’s new approach to managing its image in the early 1990s. A philosophy in which photographers led the way. Even so, photography had been the absolute star of Pirelli advertising ever since the 1960s, when one of the giants of the art, Ugo Mulas, accompanied the Cinturato and the Sempione with pictures of meditative girls, absorbed in reading a book or cheerfully smiling from the window of their Fiat Cinquecento. In the early 1970s, the Swiss photographer Gaston Jung turned to photographing the car in the role of model: it was he who photographed the Lamborghini Miura, the yellow supercar that is still considered to be one of the most beautiful automobiles ever made. The pictures that the Bergamo-born photographer Pepi Merisio devoted to off-road motorbike tyres in 1976 came almost as an aside: after taking pictures of mountain homes and valleys in the Lombard countryside, for Pirelli Motovelo he allowed himself an amused look at riders in their saddles, battling against mud and stones. In the publication later made by the Agenzia Centro, Merisio’s shots came with comic-style onomatopoeic comments: mmmmmrrrrr….ffffrrruuummmm….

Dozens of photographers passed through the Milan offices of Centro – the Pirelli Group advertising agency from the 1960s to the 1980s – each bringing a piece of their own creativity. Together they created a mosaic culture of images that made history, and that can now be retraced in the book Pirelli: Advertising with a Capital P, edited by the Pirelli Foundation. The title takes its inspiration from another iconic photo, taken by an Englishman, Adrian Hamilton, in 1978: a “long P” on an airport runway made up of 140 cars, photographed from above by a helicopter. A way of saying “tyres with a capital P”.

But the last invitation is to turn to page 105 of that book, where the photographer is seen hidden beneath the logo of the “Centro”. And we don’t even know the name of the girl who, in 1980, smiles from the page of the Financial Times and who is now in a big blown-up picture in the new exhibition at the Foundation: the slogan states that “Pirelli is young”.