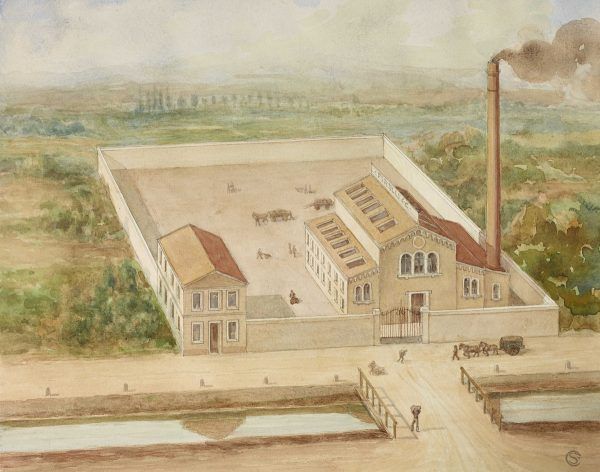 28 January: almost a century and a half has gone by since that winter’s day in 1872 when a twenty-three-year-old engineer, Giovanni Battista Pirelli, went up to Stefano Allocchio, notary public in Milan, and put his signature on the “Constitution of a limited-partnership company for the manufacture and sale of articles in elastic rubber”. It was the beginning of a long history of people and machines.

A history of mixers and vulcanising machines, heaters and rolling presses: tools that the young Pirelli had discovered a couple of years earlier on his scholarship “study trip” to the first rubber factories in France and Germany. It was January and Ingegner Pirelli would soon be leaving to buy those machines himself and he would install them in the factory being built in Via Ponte Seveso. The best mixers were made by Joseph Robinson & Co. in Manchester, England, while his choice of heater would go to Edoardo Süffert & C. of Milan. The young businessman talked about his plans and programmes with a journalist from Industriale magazine, which stated that: “we ourselves are always well pleased to write of all that is proof of our growing economic development, and we are thus content to publish some news about this new plant, which we greet with joy…”. And if business went particularly well, in time it would even be possible to face an investment in one of the gigantic machines produced by the Farrel Foundry and Machine Co. over there in Connecticut, USA. In January 1872, all of this may have been going through the head of this “romantic student”, as Pier Emilio Gennarini referred to him in the history of the company written many years later, in 1949, for Pirelli magazine. A romantic student who had a blueprint for a new industry.

Almost a year later, on 1 January 1873, Ghezzi Francesco fu Giovanni was hired as a worker and rubber labourer, with serial no. 1, at the plant in Milan. He would soon learn to operate the Robinson mixer and control the Süffert heater, and he would teach others after him.

A hundred and forty-six years of people and machines have gone by since then: today we have reached Industry 4.0. A wealth of experience and humanity, all starting from that signature of 28 January 1872 on the deed of incorporation that still bears witness to our long history.