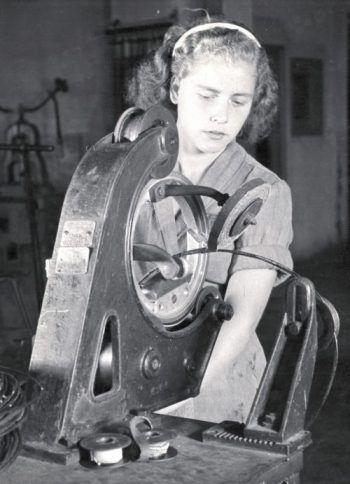 This “springtime story” in March 2018 is devoted to them: all those women workers who, in a century and a half of the industry, have stepped through the gates of Pirelli factories every morning.

The first was Rosa. Rosa Navoni, born on 22 January 1858 in Lacchiarella. She was fifteen in August 1873, and the first woman to be hired by Pirelli. Medal no. 606, worker in the rubber section, workshop II, making playground balls. The name of Rosa Navoni appears in the registers of the first factory in Via Ponte Seveso, which tell us how Rosa went on to become operations manager and went to live in Via Galilei 11, practically opposite the factory. A photo of her was published in the book that celebrated the Group’s 50th anniversary in 1922. The 1902 Agreement between the company and its workers had established the salary scale and in 1904, for example, Rosa was earning 40 centesimi a day.

During the First World War, the female worker population doubled. Workshop 15 in Bicocca consisted almost exclusively of young women workers, dozens of whom were hired each day to cope with the constant increase in production and the simultaneous drop in the number of men in the factory. The “Worker Registry” at Bicocca for the years 1915-18, now in the Historical Archive, paints a broad picture, with more than 150 personal files of women workers at Bicocca during those war years. For many of them there is a photo, but taken at a later date. And many of them, after the defeat at Caporetto, had Friulian surnames and lived in the refuge home in Via Biglia, Niguarda.

Then came the e end of the Second World War, and Italy needed to be rebuilt. Streams of girls headed towards the factory, towards paid work outside of the home. Towards emancipation from fathers and mothers. The factory girls in 1947 are pretty and free in the archive photos, with their soft wave hairdos and beaming smiles. They work with tyre beads and laboratory control instruments, shaping tennis balls and latex gloves.

After the boom of the “work for everyone” of the 1950s, came the fiery opposition between capital and workforce, including women. These issues were dealt with at the heart of the factory, in the Fatti e Notizie house organ and by Pirelli magazine in the 1960s and ’70s.

Today, a hundred and sixty years since the birth of Rosa Navoni, many things have changed in the world of work and industry. The factories of the third millennium, like the Pirelli Industrial Centre in Settimo Torinese, are the perfect embodiment of “Industry 4.0”, with technologically advanced production processes, a focus on sustainability in terms of the safety and “beauty” of the workplace, and product innovation. Taking on today’s digital challenges and adopting new rhythms of production.