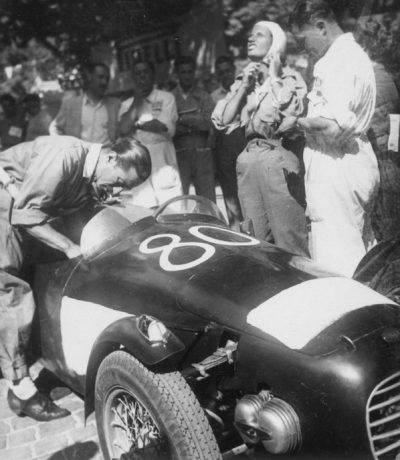 Lining up at the start of the 53rd Rally of the Azores, at 2 o’clock local time on 22 March 2018, was Tamara Molinaro in her Ford Fiesta R5 No. 19. A twenty-year-old from Como, and winner of the Ladies’ Cup in 2017, Tamara was but the latest in a long line of women drivers who have raced over the years under the Pirelli banner.

The first was Maria Teresa de Filippis, born in 1926, a Neapolitan countess. In a photo now in our Archive we see her, looking splendid as she dons her helmet in preparation for the start of the Stella Alpina race in 1949. Her car is a rare Taraschi Urania Sport, with BMW engine and Pirelli Stella Bianca tyres. A long-lost world.

Lella Lombardi is beaming, as always, in the picture that shows her before the start of the 24 Hours of Le Mans in 1980, in the World Championship for Makes. We see her at the wheel of an Osella PA8 Group 6 of the Torino Corse team fitted with Pirelli P7: her racing partner is Mark Thatcher, son of the famous Margaret, then Prime Minister of the United Kingdom. The race itself did not go that well, for Mark had an accident, but Lella Lombardi’s fighting spirit remained intact. Aged thirty-nine, she had an endless list of races behind her and still many more to come. But then she was, and still remains, the only woman to have notched up points in the Formula One World Championship, way back in 1975, in a March 751 at the Spanish Grand Prix.
Again in 1980, but this time on the rally course, with Pirelli and Fiat logos in the foreground for Michèle Mouton and Annie Arrii, the French crew in car no. 12 of the Fiat 131 Abarth/Pirelli team, at the start of the 48th Monte Carlo Rally. Michèle’s partnership with the two great Italian brands was crucial for her: not yet thirty, the driver from Grasse was well on her way towards a stunning career that would continue even after she retired from racing in 1986, for she held a number of positions at the top of the International Automobile Federation.

Making her mark in January 1978, in a photo for “Lella and Anna race with the P7”, an article in the Fatti e Notizie house organ devoted to women drivers in the world of Pirelli, is Anna Cambiaghi, a blonde twenty-seven-year-old from Milan. In actual fact, the photo dates from a few years previously, when she raced in an Alfa 2000 GTV together with Serena Pittoni in the 1975 Targa Florio, but she remained one of the queens of racing, from rally driving to speed racing, and even trucks. And to think that “she should have been an interpreter or a photographer”– but driving was the family thing, as it was for her brother Bobo. Another star began to shine in the firmament of international rally driving in those years: that of Fabrizia Pons from Turin, the navigator between 1981 and 1985 with the “première dame” Michèle Mouton in an Audi Quattro. She was an overnight success and one that was destined to fire up again a decade later, in 1996, when Fabrizia raced together with Piero Liatti in the Subaru Impreza 555 which, with its Pirelli P Zero tyres, triumphed on courses the world over. In 1997, the “reserve drivers” Liatti and Pons won the Monte Carlo Rally while the “first” Subaru team with the stars McRae-Grist was forced to pull out.

Just two letters in the surnames separate the ultimate in driving couples, together in both car and life: Anna Andreussi from Friuli and her partner Paolo Andreucci from Tuscany. With almost the same names, they were a force of nature, winning the Italian Rally Championship ten times, most recently in 2017 in a Peugeot 208 T16 Pirelli. When Paolo was just over fifty, and Anna a few years younger.