The year we broke the bank at Montecarlo 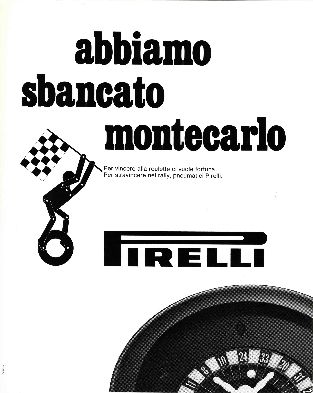 “We broke the bank at Montecarlo”, said the Pirelli advertising posters of January 1977. The bank was in fact broken – three times in a row. That Friday, 28 January, in ’77 Sandro Munari, the “Dragon”, driver for Lancia Stratos with Pirelli P7 tyres fitted, stood on the podium of the Monte Carlo Rally for the third consecutive year. With him the trusty navigator, Silvio Maiga.

Munari, Maiga, Stratos and P7 had already pulled it off in the Principality in the January of the previous year and the Dragon had declared to the corporate newspaper Fatti e Notizie [“Facts and News”]: “if the rally route had been completely covered in snow I would still have won: the Stratos is the strongest car and the P7 tyres would have done well on snow too. In fact in the only trial with snow we recorded the best time, with a considerable lead”.

Munari had embarked on the Monaco hat trick in 1975, paired with Mannucci and again driving the Lancia Stratos, the “wild beast” which for a year already had dominated the rallies thanks also to the super-low profile Pirelli P7 tyres. Years in which, in addition to Munari, drivers of the calibre of Bjorn Waldegaard, Walter Röhrl and naturally Markku Alen raced for Pirelli. For the Stratos the cars to beat were “rivals” in a certain sense, seeing as they were called Fiat 124 Abarth and, above all, Fiat 131 Abarth.

However Pirelli P7 succeeded in reconciling everyone, cool Nordic drivers and crafty and imaginative Mediterranean types, cars designed almost specifically for racing and the “racing” versions of popular models (cf. the 131…). It was possibly not just a question of product excellence: the legend of the organisational efficiency of the Pirelli racing team was created at that time. “The Magnificent Fifteen” as Fatti e Notizie called them as early as 1974 in an article dedicated to those working in this sport, interest in which was growing year after year. “They are not drivers, navigators or mechanics, yet they are part of the varied and multicoloured carousel of international rallies. The most important and delicate task of this specialist team is that of technical consultancy and organisation of the service points. Often the choice of one tyre over another turns out to be fundamental in terms of ranking...”

In the bank breaking operation of Montecarlo in 1977, the Pirelli rally team definitely also played its fiche…