Music a Staple at the Pirelli Cultural Centre

The publication by the Pirelli Foundation of the book Il Canto della Fabbrica – which was the subject of debate on 6 July 2018 at the Il Libro Possibile Festival in Polignano a Mare – brings us to talk about the many times that music has been part of the cultural life of Pirelli. One key meeting place was the Pirelli Cultural Centre, which was set up in 1947 and directed for many years by Silvestro Severgnini. The Cultural Centre had its home in the premises of the Ritrovo in the old Brusada factory, which emerged unscathed from the 1943 bombing raids. It maintained that “culture is a staple”, as its founder himself wrote in an article published in Pirelli magazine no. 1 of 1951. “A new formula, and a pretty successful one at that, to increase workers’ interest in culture”. The company “provides the means for those of its employees who so wish to take part in the liveliest and most dynamic manifestations of knowledge”. Silvestro Severgnini joined the company in 1939 as a tyre salesman, but soon he found himself playing a key role in promoting Pirelli’s corporate culture, which acquired ever greater importance in the post-war period.

For Severgnini, music was naturally one of the “dynamic manifestations of knowledge”. In a meeting at the Ritrovo in 1950, there was talk of music inspired by machines, and the connection to today’s Canto della Fabbrica – the song of the factory – is quite amazing. Severgnini himself wrote about this in Pirelli magazine no. 4 of 1949, talking of the “mechanical” music inspired by the Pacific 231 train in the work of the Swiss composer Arthur Honegger in 1923, and music inspired by steel foundries in that of the Russian musician Alexander Vasilyevich Mosolov in 1927. Thanks to the work of the Cultural Centre, year after year Stravinsky and Debussy became “culture as a staple” amid the vulcanisers and mixers. The company did all it could to facilitate access to music by its employees, and subscriptions to the “Musical Afternoons” in Milan went up tenfold in three years, and those to the La Scala opera house went from 15 to 130 in 1950. A “concert of the month” was put on, for Pirelliani only, at the Piccolo Teatro di Milano and a music hour – L’Ora della Musica – was held regularly at 5.45 on Friday afternoons at the Ritrovo. It was led by none other than Silvestro Severgnini, who by this time was known in Milan as the man who had “opened La Scala to the people”. Taking up this long tradition of promoting and disseminating culture, still today Pirelli works as a partner with these prestigious cultural institutions, also for conferences for company employees.

The Music Club – the Circolo della Musica – was set up in 1953 with the brilliant idea of putting on a series of tributes to living musicians in the new premises of the Ritrovo, which at this point moved to Corso Venezia. As the old Brusada was making way for the Tower, composers were invited to meet with an audience of Pirelli workers and office staff “who always present such a fine show of rapt attention and intense understanding as to become themselves worthy every time of the most open and unconditional applause”. Thus it was that a worker in a great company could personally meet composers of the calibre of Vladimir Vogel or Roman Vlad.

Another idea came the following year, with an opening up to “electronic music”. The transition from Stockhausen to John Cage was brief: “During his first European tour”, we read in the November 1954 edition of the Fatti e Notizie house organ, “the American musician John Cage performed his only concert in Italy, on the initiative of our Cultural Centre, with music pieces composed for ‘prepared pianos’.” The event, which was presented to an almost incredulous audience by the composer and musicologist Riccardo Malipiero, was destined to become part of the history of modern corporate culture: a Milan-based newspaper at the time declared that “the Pirelli Culture Centre increasingly runs the risk of becoming one of the liveliest cultural venues in the city”. The worker who listened that Friday evening on 5 November 1954 to the Concerto for Prepared Piano by John Cage – “Music? Maybe, or maybe something different”, said Malpierio – would never have imagined that, sixty years later, another worker at the Industrial Centre in Settimo Torinese would be on the factory floor listening to Francesco Fiore’s Canto della Fabbrica with Salvatore Accardo’s violin. But this is neither a coincidence, nor is it “another story”: it’s “corporate culture”. 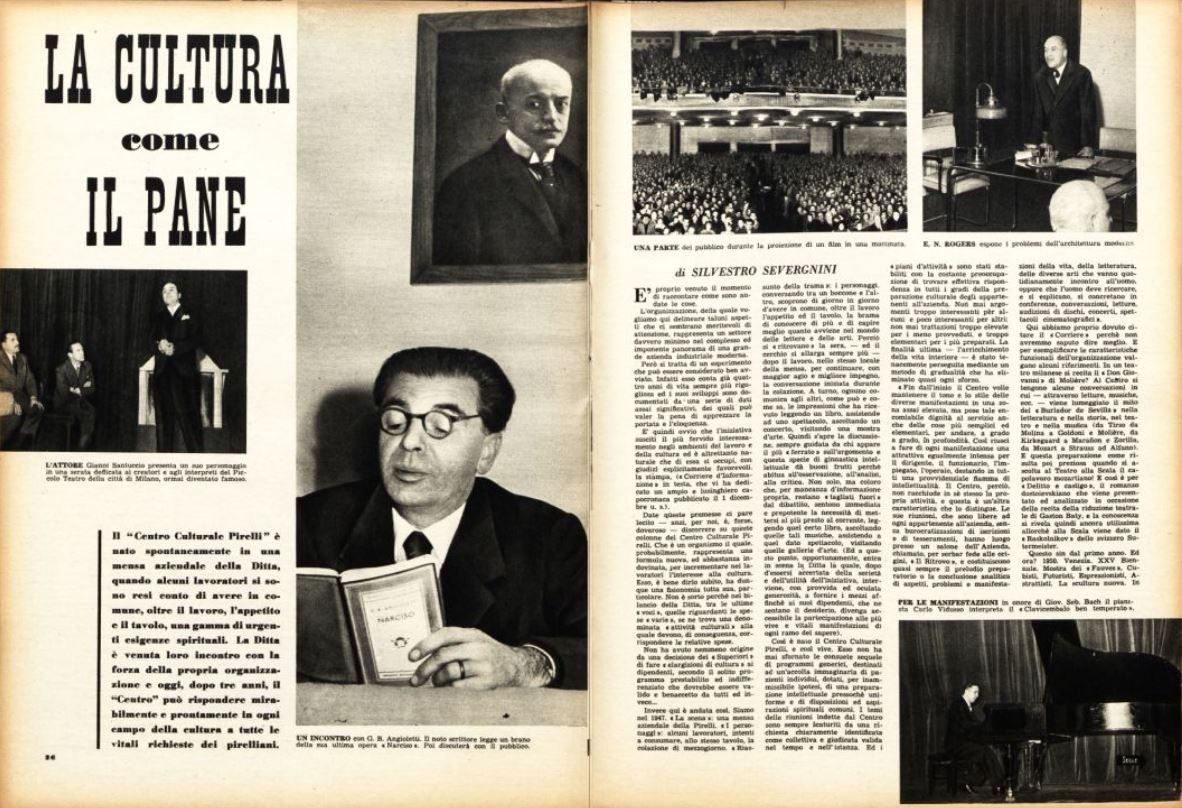