The Daredevil Life of Antonio Ascari: A Father’s Footsteps 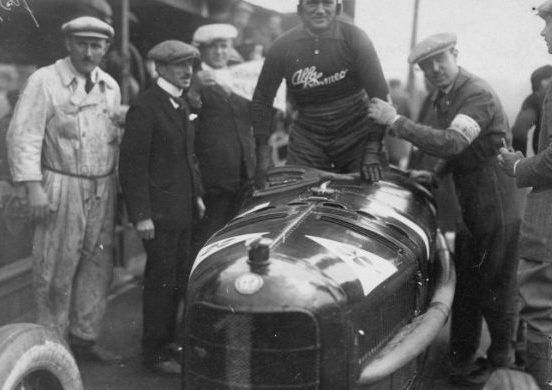 The Italian Grand Prix at Monza last weekend was dedicated to Alberto Ascari, one of the greatest drivers in the history of motor racing. In spite of his considerable size, he was called “little Ascari”, or “Ascarino”, because he was the son of Antonio Ascari, a driver who became a legend in the Roaring Twenties. Antonio was born in Bonferraro, in the province of Verona, in 1888. And it cannot be just a coincidence that, four years later, a certain Tazio Nuvolari would be born in Castel d’Ario, just a few miles away, in the province of Mantua. This is why, in his portrait of the “Flying Mantuan”, published in the first issue of Pirelli magazine, the journalist Orio Vergani referred to the area as a sort of “land of courage”. Antonio repaired tractor engines and, in that workshop out in the middle of the fields, he learned to work with carburettors and connecting rods and pistons. It was his brother who instilled the idea in him that he might also work with cars. Possibly even racing cars. And possibly even get into them and drive them…

So Antonio moved to Milan, first to De Vecchi to learn how cars were made, and then to Alfa Romeo: first as a mechanic, then as a test driver. And, lastly, as a racing driver. Ascari was ready to show the world what he was capable of, already on the eve of the Italian Grand Prix of 1923, in his brand new Alfa P1 at Monza. The great Alfa Romeo team was to be unbeatable: Ascari in number 6, Giuseppe Campari in 12, and Ugo Sivocci in 17. And when Sivocci died in a crash during the practice sessions, someone noticed that the green four-leaf clover, which had become a symbol of Alfa, had not been placed on his car. The team withdrew, and never again would there be a number 17 in a race.

Things went right the following year. With his Alfa P2 8C fitted with Pirelli Cord tyres, Ascari finally managed to win the Italian Grand Prix – which was also the European Grand Prix that year – at Monza in October 1924. With a time of 3 minutes and 34 seconds, the Alfa Romeo driver set a lap record that was destined to remain unbeaten for many years. Always by his side was the inseparable Giuseppe Campari, his team-mate friend and opponent. The customary triumph of Alfa (Ascari as the winner and Campari in second place) came again the following year at the Belgian Grand Prix at Spa. But it was to be the last.

Maybe Ascari was too hot-headed that day on the Monthléry circuit at the French Grand Prix in 1925. Some say he went too fast round the corner, others maintained there should never have been the fence, which got caught in the wheel, sending the car flying and the driver hurtling to the ground. Antonio Ascari died on 26 July 1925. Aged almost thirty-seven.

His son Alberto, who was seven years old at the time, made a vow to himself that, if he ever followed in his father’s footsteps as a driver, he would never race on the 26th. And then, when he became a driver, he added that he would never be parted from his lucky blue helmet. He lost his life in Monza in 1955 – almost exactly thirty years after his father, also at the age of almost thirty-seven – while test-driving a Ferrari 750. His friends and colleagues Gigi Villoresi and Eugenio Castellotti called him over to Monza and he, Alberto, had willingly accepted to get into the car and do a few test laps – even though he had left his lucky blue helmet at home, and even though it was 26 May.