Life and Work in the Tower 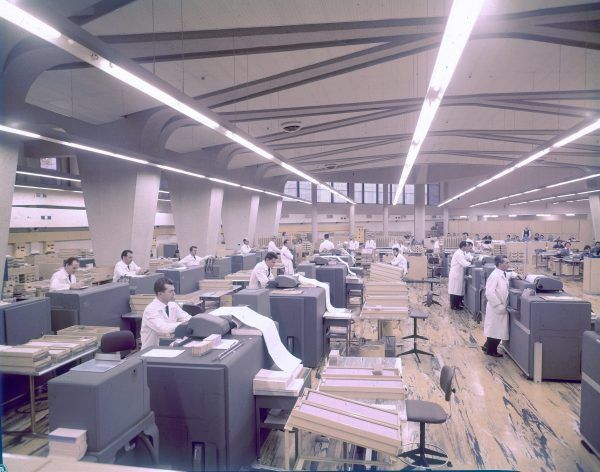 Each floor had its own management office, and the workplaces, as we see in the “A Photographer in the office” report published in Fatti e notizie, in issue no. 4 of 1960, were arranged in bright open spaces with air conditioning. The tower could accommodate about 2000 people, who came in and out and moved around the building every day.

What made the design so advanced was thus not only the architectural and structural solutions, but also that of the services, making mobility and work within the building extremely efficient. Preliminary study had assessed movements in and out of the building (from Via Fabio Filzi or from the square in front of the central station) as well as inside, estimating the number of people, times of day, and the means by which people would reach the tower, taking into consideration both employees and external guests. One of the reasons for building a tower rather than a horizontal building was because it would be possible to move around inside using lifts. 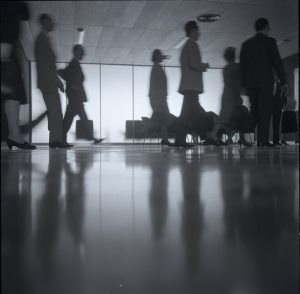 After assessing the number of people on each floor and their needs, ten lifts with different capacities and speeds were designed to serve the various floors. Using a system of synchronised clocks, the lifts could automatically adapt to four different conditions of traffic: peak traffic up and down during the hours when the staff entered and left the building, normal traffic, and reduced traffic. Also the mail sorting system was carefully planned and designed. The average daily volume of mail consisted of 11,000 letters, 900 magazines, almost 2000 large packages and 300 telegrams. A system of post boxes was created up the entire length of the building, so that they could be sent from the post office to the right floor and unloaded using a sloping surface into a collection bin. These were new approaches to the work experience for the future “Italy on the move”. The entrance hall for employees on the ground floor, 1960, photo by Brunello The entrance of Pirelli Centre, 1960, photo by Corso
close