Aware of present and future 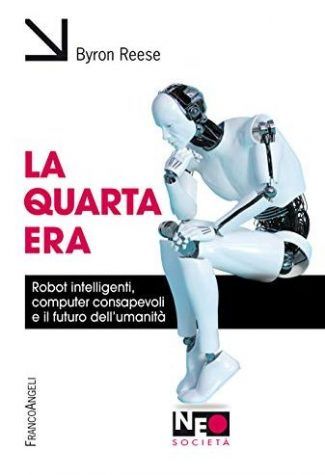 The past and the future, stopping at the present along the way. Three things that can confuse anyone who truly attempts to understand more about the current situation. Three things, however, that are all deeply linked, and which sooner or later should be pondered by everyone. Especially, perhaps, by the entrepreneurs and managers who want to live up to their positions (and, obviously, by those who are called on to decide the future of social and political entities).

Anyone interested in undertaking such an endeavour should read The Fourth Age: Smart Robots, Conscious Computers, and the Future of Humanity, the latest book from Byron Reese, an expert on new technologies who is also CEO of research company Gigaom, which does research on technologies and social systems.

The study is part of the vast body of current research into the evolution of humanity’s technological and productive assets. The author begins by stating that, throughout its history, humanity has already been transformed by technology three times, and that today we are on the brink of a fourth major transition, brought about mainly by two technologies: Artificial Intelligence (AI) and robotics. Reese’s goal – in which he is successful – is to explain various scientific hypotheses that illustrate how we have come to the present situation and, most importantly, that help us better assess the moment we are living in.

The book has a number of strengths. The first is its language, which seeks to be clear and readable, and has the feel of a story. Then there is its ability – as journalist Emil Abirascid, founder of startupbusiness.it, notes in his introduction – to tackle a complex theme with nearly endless implications, including some that today we can only imagine, while taking into account every point of view, and analysing the various possible scenarios without neglecting even the most radical positions.

Clarity and intellectual honesty are defining features of Reese’s book, which begins by summarising mankind’s journey up to this point, and then moves on decisively to the topic of AI, discussing the thorny issue of intelligence and consciousness in computers, before finally delving into the fourth age of technological evolution.

The greatest strength of Byron Reese’s book, however, is that it provides a number of important tools of knowledge, and none of the pre-packaged answers to the many questions that new technologies bring up.

As the author puts it at one point, ‘No one knows how far all of this can go, but at some point we may start to wonder where the human ends and the machine begins. Old questions will take on new dimensions: What does it mean to be a human? What are life and death? Are you your body? Are you your brain? Are you your mind?’ In the closing paragraphs of his work, while sketching out a future that is still unimaginable yet ultimately positive, Reese reminds his readers of a crucial underlying condition: ‘It is no longer simply an idle dream but a real possibility. It is no longer a question of resources, it is simply a question of will.’