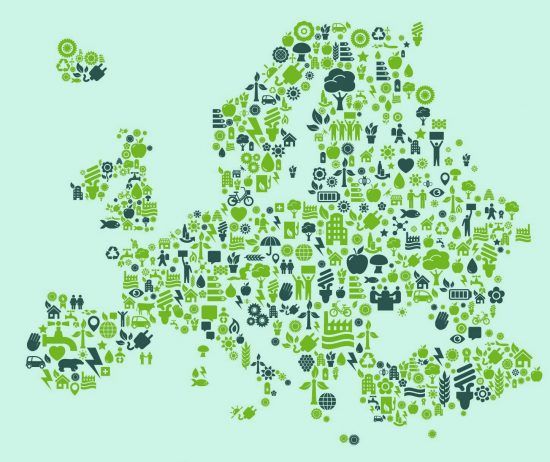 A bright future for the EU and the euro. And the prospect of a more sustainable approach to development, which can address the major issues of environmental risk and social inequality. The green economy is an essential cornerstone of the paradigm shift needed to relaunch the market economy and, more generally, to safeguard liberal democracy. And indeed, in the first few weeks of the 2020s, the themes of the great transformation and the Green New Deal can be found at the heart of the heated and original debates taking place during the traditional events and at the locations frequented by the world’s elite: the World Economic Forum in Davos, the Basilica of the Franciscan friars for the Assisi manifesto (inspired by Pope Francis‘ encyclical, ‘Laudato si”), the offices of the European Commission in Brussels and the ECB in Frankfurt (dedicated to tackling the so-called ‘green swan’ climate events that upset the markets), the bastions of big finance such as the BlackRock investment fund in New York and the factories of small and medium Italian companies in the ‘new industrial triangle’ that lies between Lombardy, the North-East and Emilia-Romagna, the lecture halls of prestigious universities in the USA and Europe, and the city squares crowded with the environmental movements whose mascot is Greta Thunberg.

In a difficult world, everything is overshadowed by tensions, poverty, social resentments and political rifts. And in an era that is defined by the connections between the environment, Artificial Intelligence and globalisation, we must rethink everything. This is a world undergoing radical change. A world in crisis, you might say, with the word ‘crisis’ taking on a dual meaning, of both danger and opportunity.

In order to gain a better understanding of the current situation, we can rely on the words of Joseph Stiglitz, winner of the Nobel Prize in Economics and long-time critic of the euro: ‘The Green New Deal can save the single currency and above all help Italy, because it will require enormous levels of investment, which in turn will necessitate greater budgetary flexibility, finally allowing the stimuli for growth that Italy most of all has needed for years,’ he told La Stampa (23 January). ‘A massive turning point,’ he concludes, with ‘a reform of the policies adopted by Brussels so far.’ Why? ‘In order to achieve the new environmental objectives which are increasingly necessary from the point of view of the survival of our planet, we will need billions of euros, if not a few trillion. It is a choice that makes a great deal of sense, not only because it aims to clean up the environment and combat climate change, but also because it promises to build a new economy.’

In our times, schematic, ideological decisions regarding austerity, so favoured by both political circles and public opinion in Northern Europe, are finally losing their credibility, as they have failed to tackle the environmental and social crises that have arisen. The conditions are now in place for a change in EU policy, relaunching investments in sustainable economic growth and development, which Stiglitz also refers to as ‘the best remedy against the emergence of populism and sovereignty.’ Public investments, both at the EU and national level, and private investments, in the environment and in order to protect the land. But also in training. And in the reforms required in order to make full use of the opportunities offered by the digital economy and Artificial Intelligence, which represent an extraordinary turning point in the relationship between young people and work. Not the current public spending, which is unproductive at best, but rather a major programme that sees governments and businesses acting together. Businesses that demonstrate an extraordinary sensitivity to the issues surrounding sustainable development and to promoting a form of capitalism that is rich in values focused on the needs of stakeholders (consumers, employees, suppliers, citizens of the local communities), and no longer exclusively centred on shareholders, stakeholders and financial investors.

These are the very themes that resonated in Davos, even when they appeared through the utopian image of ‘planting a trillion trees’ so dear to Klaus Schwab, Founder and Executive Chairman of the World Economic Forum, so ripe for being co-opted for propaganda that it was immediately copied by Donald Trump. And indeed, there will be an attempt at green-washing by opportunistic companies and political circles. But environmentalist inspiration is increasingly well-founded and sincere, especially in the younger generations, as well as among educated and responsible consumers. And it calls for more information, along with logical choices that take a long-term view.

These are the very values contained within the Assisi manifesto, signed by Symbola, the Franciscan Friars and a long list of figures from the worlds of business, economics, culture and from numerous social organisations, and presented with a major public debate in the Basilica of Saint Francis of Assisi on Friday 24 January (we discussed this at length in last week’s blog): ‘A sustainable and humane economy’, which also considers social issues, with an awareness that ‘our green economy makes our companies more competitive and creates jobs, by drawing upon an approach to production (the roots of which often go back centuries) linked to quality, beauty, efficiency and the history of cities and regions. This approach focuses on social cohesion as a factor of production, and combines empathy and technology.’

‘Capitalism is being put to the test within the context of the global village,’ summarises Gianmario Verona, economist and rector of Bocconi University (La Stampa, 26th January). He goes on to remind us that ‘the leaders of investment banks, Larry Fink of BlackRock first and foremost, are placing the emphasis on investments related to the environment, social impact and good governance (hence the acronym ESG)’ and ‘in light of their influential role in the economic system and the ever-increasing number of declarations on these issues, they represent perhaps the most immediate driver for making structural changes to the way in which finance and capitalism are understood today.’

Verona adds: ‘The digital revolution is doing its bit, connecting citizens and raising awareness, pushing universities to come down out of their ivory towers and bringing new leaders to the fore, regardless of whether or not they answer to the name of Greta Thunberg.’ Political and economic ideas and choices. Circular and civil economy projects. A world that is moving in a positive direction, and in which the EU regains a solid central position.

A successful Turin International Book Fair and the new role played by bookshops and libraries
The new threat of a “shortage economy” and how the EU could act to be industrial protagonist
In praise of “pure research”, and its significance for the understanding of ways and reasons to improve environment, health and quality of life
Load more
Grazie per la tua richiesta
Abbiamo preso in carico la tua richiesta, il team della Fondazione Pirelli ti contatterà per confermare la disponibilità.
Grazie per la tua richiesta
La prenotazione al momento non è disponibile.
Thank you! Registration was successful!
We have sent you an e-mail to the e-mail address you provided. Click on the link inside to confirm the registration.
Register
Already registered? click here
Warning! Check the correctness of the data entered.
Enter
Forgot password? click here
Warning! Check the correctness of the data entered.
Forgot password?