Doing theatre, a life-giving gamble for good business: the Eliseo and Parenti Theatres 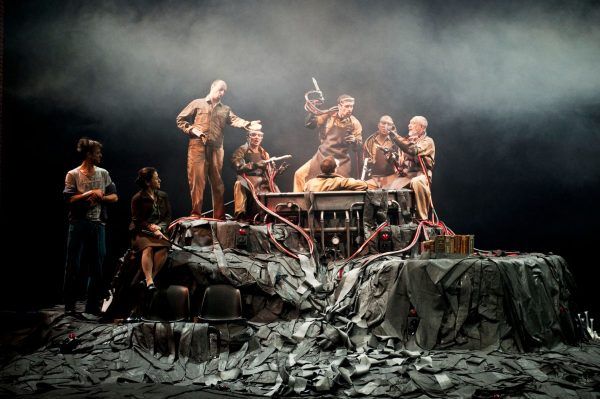 Theatre is popular culture, the “ideal place for communities to voice their stories,” as Andrée Ruth Shammah, the great “lady of theatre” loves to say. Keeping a theatre alive, bringing it to life, nurturing it, filling it with actors, audiences,  allowing it to represent our past, present and future, is not an easy task.

Factories are also popular culture: work, people, research, bonds and conflicts, a positive culture of making and selling, manufacturing and market, active economy and development. Then there’s the history. A factory’s many stories. Stories which can quite easily be turned into theatre (“Settimo, work and factory“, directed by Serena Sinigalia with the support of Pirelli Foundation, was one of Piccolo Teatro di Milano‘s most successful productions in 2012; moreover, ten of Italy’s biggest theatres were also involved, in 2015, in the “L’impresa va in scena” project (business takes the stage) organized by the Confindustria Culture Group, to much critical and public acclaim.

Memories, very clear ones, of such relations come back to mind at a time when theatrical people, the likes of Shammah for Teatro Parenti in Milan or Luca Barbareschi for Rome’s Eliseo, come together to narrate theatrical initiatives and seasons with industrial people like Pirelli, who wish to support theatre. Pirelli‘s name appears time and again throughout history beside those of founders of other theatres, such as Il Piccolo di Milano, and beside the names of those who have supported other initiatives which, again, have to do with the stage, such as La Scale, l’Orchestra Verde, and l’Orchestra da Camera Italiana.  Cultures of making and their manifestations. Embark on and perform. Interpret the times and how they’re changing. The world as action and representation. Amazing theatre, isn’t it?

Theatre and industry have many words in common. Take laboratory, for example. Or research. Manufacture, that world of scenery and costume, and the world of industry.  And there’s the word root – com – that lives like a life force of another word that sits well with both theatre and industry: community (the lesson of Adriano Olivetti, or of other leading impresarios attentive to social issues, like Pirelli, are worth a re-read). Come to think of it, they share a word root and very fertile morpheme with another that is key to the economy: competitiveness (mentioned several times on this blog). Andrée Shammah mentions several more: condivisione (sharing) and contagio (contaminate/infect). Infectious, the spirit with which theatre addresses its audience, the more valuable the more it participates. Infectious, the tendency to innovate and participate in factories too: without it, there would be no competitiveness.

Continuing with the game of similarities, we don’t have to look much further than the most recent project of one of Italy’s greatest actors: Luca Barbareschi. He is now the owner of Rome’s most famous and prestigious theatres, the Eliseo in Via Nazionale, across the street from the Bank of Italy and a stone’s throw from the Quirinale Palace. He invested a large sum of money in it, most of which was his own and some from supporters (including Pirelli), and set up a space in which to do theatre, music, meetings, literature, training, and exhibitions. Oh, and a good restaurant. A theatre that will be managed – they hope – like a successful company. Barbareschi’s role? As “entrprenactor”, to coin a fun neologism.

To emphasize the many coincidences, let’s not forget that on the site of the Teatro Parenti, currently being expanded, in Milan, there once stood a bolt factory. If the intention is to embrace Leonardo Sciascia’s point of view (there are no coincidences only incidences) and listen to Andrée Shammah’s suggestions (“there are spirits”  in places that make good theatre), that same spirit of industry, the spirit of enterprise, the spirit of “making beautiful things that the world will like” is also at play in the places where the Parenti theatre has long been growing into its current identity: a complex with more than one theatre that continues to grow, bringing a fascinating 1930s pool – la Caimi – back to life while living multiple lives amid shows, sport, training, music, literature, and communal life activities like helping and eating together (grand gala opening and concert last week). The re-launch of the Teatro Parenti and Caimi adventure are the handiwork of both public and private  (including Pirelli along with Anima, Intesa San Paolo, Nissim from the Bolton Group, etc.)  Synergies Synchronicities

This is the energy of Milan, a metropolis that has always embraced the contamination of public and private, institutions and society, business and culture.  Celebrating economic, social and cultural innovation. Finding a creative way for theatre and a swimming pool to come together. And to continue to leave the city tangible evidence of its business endeavour. For future generations.