“Lifelong learning”, the suggestions of “The Economist and the importance of knowing how to use words properly 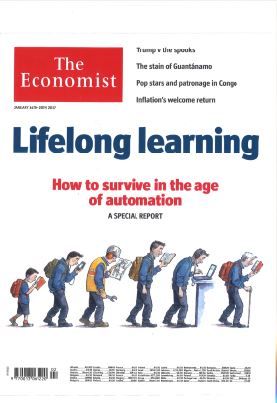 “Lifelong learning” is the cover heading of “The Economist”. The illustration is a sequence of figures who represent the various ages, from the child reading a book to the boy with an iPad, from the workman battling with hi-tech designs to the young man travelling with a printed paper guide-book, from the technician in front of his computer to the old man holding something which might be a book but might also be a tablet for digital reading. They are reading and studying, however. “Lifelong learning”, learning something new throughout their entire lives. The sub-heading is very clear. “How to survive in the age of automation”. Inside, apart from the editorial (studying and learning is indispensable but does not necessarily guarantee any reduction in inequalities…), there are eleven pages of investigations.  Everything is worth reading, carefully (“lifelong learning”, by the way, is also keeping oneself informed, is it not?).

Reading, studying, learning. A challenge for the workplace and for one’s personal and social role in life. A challenge for the use of language (we already discussed this in last week’s blog, in relation to the use of the subjunctive and to the difference in strength and power “between those who use 100 words and those who use 1000”).  Nowadays it is worth really paying attention to the meaning of words which are well understood and well-utilised. This will allow us to manage how they evolve.

The initial focus is on the economy. On the understanding and awareness of phenomena. Can we take, for example, the “Great Crisis” which blew up around a decade ago and whose effects we are still observing? At its roots there is still a poor use of words. A “failure of language”. This is explained by Arjun Appadurai, a professor of anthropology at New York University, in a book recently released by the publisher Cortina and entitled “Banking on words – the failure of language in the age of derivative finance” (to which Massimo Giannini made reference in La Repubblica newspaper, on 2nd January). That failure hinges on the word “derivative”.  An insurance certificate linked to agriculture and to meteorological vagaries, at its origins (a good product, in fact, as an insurance policy for farmers) which, however, becomes something completely different in the age of financial greed: a whirling paper vortex, almost always aimed at ignorant savers, persuaded by rapacious speculators, to buy “promises” of sumptuous profits. “Junk bonds”, as someone, in a rare moment of sincerity in Wall Street, had called certain financial products of an obscure type and which, in the end, spelled certain failure.

In this world where paper only produces more paper, the markets deal in pieces of paper which only very distantly relate to a real asset from which they derive their existence, “derivative” finance is separated from the real economy, betraying itself, and its basic function of financing companies and economic development. It becomes pretence and deceit.

The market too becomes separated from itself, moving from a place of exchanges into a “chain letter”.  And millions of families, who were taken in by the promises of derivative riches (as in so many other cases through history where someone believed in the illusions about the philosopher’s stone which turned everything into gold, from speculation about tulip bulbs and the myriads of toxic financial experiments…) found themselves out on the street. Homeless. Jobless. This was the Great Crisis. People ruined by the “charismatic nature of derivatives” and by the deceit “of a market transformed into an absolute ontology”. “A semantic swindle”, remarks Appadurai. An interplay of words and economic graphics which are indistinguishable “from the schemes of astrologers, parapsychologists and readers of Tarot cards”. This, then, is the “failure of language”. With eager finance characterised not “by intelligence but by sophisticated stupidity” (the definition is by John Kenneth Galbraith) and which finds an audience as a result of the minimal levels of attention paid to it (ignorance of the economy, low level of information provided) on the part of those who are charmed by it and especially in view of the responsibility of a policy which for too long had chosen not to discipline the markets with efficiency, simplicity and transparency and to check on what was being foisted upon very rash savers and investors.

Appadurai places the emphasis heavily on the value of words. And he writes about the need to achieve a “radical transformation of the architecture of our social thinking” and therefore “to rethink from the very foundations the vocabulary which we utilise to speak about human society”. To reconstruct that language which had failed. To give back value and sense to words.

We live off words, actually. And words have a soul. And wings. They announce things. They remind us of things. They define the world. They are not made of the same substance as dreams. But they weigh so heavily, on the history and on the destiny of humanity, that they can move and perhaps change things which have been said.

It would also be worthwhile for the financiers and economists, leaving aside in their “public utterances” their abstruse technical terminology (behind which, as Appadurai also documents, deceit is often hidden…) to return to the true value of the words they use. By re-reading the works of the writers and the poets, for example. By accepting what was said by Paco Ignacio Taibo III: “We write because we believe in the power of the word, in its transforming ability of persuasion; we know that literature is the most efficient weapon of destruction of damaged neurons”. And let us remember Paul Eluard: “There are words which make us live/ And they are innocent words/ The word warmth/ the word trust/ Justice love and the word liberty/ the word son and the word kindness/ Certain names of flowers certain names of fruits/ The word courage the word discover/ And the word brother and the word companion/ And certain names of places and countries/ and certain names of women and of friends…”.

Here they are, some key words, including in economics: Justice, liberty… Trust. And kindness. “Kindness in our words to start again”, remarks Dacia Maraini, an extremely sensitive writer, quoting (in the Corriere della Sera newspaper, on 3rd January) the end-of-year speech by the President of the Republic Sergio Mattarella. And she asks for an improved vocabulary. “Let us re-discover good manners, politeness, courtesy, trustworthiness, understanding, tolerance”. Is it too much to ask of a banker, a financier, an entrepreneur and a manager, to pay closer attention to the cardinal words of civil cohabitation, in addition to the technical terms of the Anglo-Saxon “market-based” jargon?

Because “words are important”, “we need to combat wrong words” and “let us find the right words”, exhorted Nanni Moretti in the film, “Palombella rossa”(“Red Wood Pigeon”).  Declaring that “he who speaks badly thinks badly and lives badly”.  The swindle of financial language and the Great Crisis are confirmations of this. In order to leave them behind with dignity, it is critical to continue to read, to study and to learn. For the whole of our lives.  Hence, through “lifelong learning”.