Max Weber, the “black swan” and Churchill’s “Keep Calm”: how to face the coronavirus and the recession without giving in to panic, but building the future instead 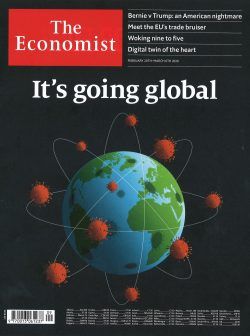 Politics as a vocation”, wrote Max Weber a century ago. A lofty, ambitious profession, built on “intellectual work“, with all the weight of knowledge, skills and a sense of responsibility, as well as the necessary passion for civil values. In these difficult and controversial times, Weber’s book becomes relevant again. And beyond the obvious question of how many of today’s politicians are – in direct opposition of Weber’s teachings – both incompetent and irresponsible (not just in Italy, of course), it is worth going back to those pages, now that we are faced with a variety of phenomena that are upsetting the order of our daily lives and our plans for a better future. Phenomena like epidemics (including the latest, the coronavirus) and environmental disasters, but also mass migrations (we only need to think of the new dramatic tensions on the borders between Turkey and Greece, with thousands of refugees clamouring to enter Europe), major demographic issues and the signs of economic crises which – beyond the much-feared and highly probable recession – reveal how essential a real “paradigm shift” is, in order to attempt to break down the gross distortions of globalisation and drive growth in the direction of sustainable, environmental and social development. Some real political challenges, then, which call for a capable, competent and accountable ruling class.

What are we seeing instead? Another apt quote – this time taken from the writings of one of Europe’s greatest philosophers, Søren Kierkegaard – sums it up: “The ship is in the hands of the ship’s cook, and the captain’s loudspeaker is broadcasting not the course, but what we shall eat tomorrow.” These words contain Kierkegaard’s sense of unease in the face of a modernity confronted without the instruments of a new philosophy or school of thought that could counterbalance “the decline of the West”, but we can also detect his dismay in the face of the extraordinary developments determined by the progress of science and the economy (again, from Kierkegaard: “There is nothing with which every man is so afraid as getting to know how enormously much he is capable of doing and becoming.”)

Today, rereading those pages – and moving beyond the irritation felt towards the incongruous demagogues who have taken the place of the competent captain of our ship – we must embrace the painful yet thrilling recognition of the possible directions in which our crisis could lead, remembering the semantic ambivalence of the word: crisis as danger, but also as opportunity.

Many commentators have stated that we are currently facing a “black swan“: an unforeseen event that turns economic and social structures on their head. A “black swan” that takes the form of the coronavirus. But also that of the 50,000 Syrian, Afghan and Iraqi refugees on the borders between Turkey and Greece, who Turkish leader Erdogan wants to drive into Europe through Greece, playing an unscrupulous political game to obtain another 3 billion euros in EU funds (in addition to the 6 already pocketed over the last four years), and strengthen his anti-European presence within the Mediterranean.

But are these really “black swans”? Or rather issues that politics – and first and foremost, the politics of the EU and the major European countries – has not known how to address? “Two crises, same failure”, declares Andrea Bonanni (La Repubblica, 2 March), referring to “Europe, a land of viruses and migrants”. And indeed, the political decisions made with regard to the governance of migration and those in response to climate change in Europe – issues that are linked to a certain extent – have no doubt fallen short, as have the health care facilities required to promptly respond to the looming pandemic, and the coordination of national and European decisions.

Nuriel Roubini, the economist who single-handedly predicted the global financial crisis of 2007-2008, refers to it as a “white swan”, if anything: a predictable but underestimated risk (Il Sole24Ore, 27 February).

When it comes to the dimensions and breadth of the health crisis, no one can estimate or responsibly predict how long it will last.

Today, we are beginning to see the sheer scale of the initial economic impact of these events: since February 20, when the consequences of the spread of the virus on the world’s economies became apparent, the global stock markets have plummeted, “burning” 6 trillion dollars. And in the past week alone, they have all dropped by well over 10%, with London’s FTSE 100 down 11.2% and the Dax in Frankfurt down 12.84%: the worst downturn since the autumn of 2008, the height of the financial crisis.

The nerviness of the financial markets accurately reflects the fragility and the difficulties faced by international supply chains, particularly in light of the partial industrial paralysis of China, the “factory of the world“, which has had a knock-on effect on many manufacturing sectors in the USA and Europe, as well as in the Far East, beginning with Japan. “This is the crisis of globalisation, China is losing its central position,” predicts Giulio Tremonti, former Minister of the Economy and President of the Aspen Institute Italia (Corriere della Sera, 2 April). But it is also a crisis for the world of transport, from international air travel to sea freight and road haulage. In addition, tourism and trade, hospitality and the restaurant industry and the culture and entertainment businesses have also been hit hard.

How long will it last? We don’t know. Concerns are widespread. “A world crisis”, Moody’s fears, with a 0.4% reduction in the global growth rate (La Stampa, 27 February). And in the Economic Outlook 2019, the OECD refers to the coronavirus as “the greatest danger” since the financial crisis, exposing the world economy to “an unprecedented threat”.

What about Italy? Our economy, which was already in a state of stagnation due to the sharp fall in industrial production, is now on the threshold of another recession, the fourth in ten years (as discussed in last week’s blog). The Red research centre leans towards the worst case, estimating a loss of 1% to 3% from the 2020 GDP, which would equate to anything from 9 to 27 billion euros. Goldman Sachs is more cautious, anticipating a drop of 0.8% in GDP, while the OECD forecasts “zero growth”. Whatever the case, the situation is dire.

The government is preparing a plan: “Aid to the tune of 3.6 billion”, announced the Minister of the Economy Roberto Gualtieri (La Repubblica, 1 March), with a focus not only on businesses in the “red zones” suffering from the greatest numbers of infections in Lombardy and Veneto, but on those in all areas and sectors brought to their knees by the consequences of the epidemic (trade, tourism, transport, leisure). In addition, shared European choices are also on the table, if the crisis lasts and the recession hits other EU countries as hard as it has Italy, as is quite likely to be the case: once again, Goldman Sachs forecasts a growth of 0.3% in the EU for 2020, compared to 1% before the virus exploded onto the scene.

But away from the emergency measures, it is also worth turning our minds not only to the individual Italian measures but also to the need for a bona fide EU strategy for industrial and economic recovery; an extraordinary effort is required in order to put long term development projects in place, rebuilding the confidence of those who invest, produce and consume. The Green New Deal of EU Commission President Ursula von der Leyen represents an important decision, provided it is supported by strong European resources, a concrete investment policy and financial and fiscal measures from Brussels and the individual EU countries.

More generally, the theme is one of an attentive, competent and responsible culture and governing style; a relaunch of the economy that finally gives due consideration to the “paradigm shift” towards sustainability and a new balance with regard to the quality of development.

In the depths of this emergency – or more specifically, in order to make it through to the other side – the motto of Winston Churchill, a man who knew plenty about ambition and the rules of politics, even in the darkest of times, becomes relevant once more: “Keep Calm and Carry On.” Quite the opposite of the scenes of frenzy and chaos that we have seen in recent weeks in Italy and elsewhere within political and governmental circles, both national and local, where alarm, proclamations and “shouting” have facilitated the descent into panic of people all over Europe. And, with regard to the media, it is certainly worth insisting on the need for genuine information, without recourse to scaremongering (Corriere della Sera, 2 March).

Indeed, it is up to us to confront “our uncertainties” with a sense of awareness, in a globalised and very fragile world (Maurizio Ferrera in Corriere della Sera, 1 March), with the knowledge that the crisis we are facing will likely last a long time. A coronavirus vaccine will probably be found soon, but an effective vaccine for uncertainty does not exist, and never will. Neither local closures, hunting for scapegoats, creating “enemies” to hate and introducing bans will serve to resolve the situation, regardless of the level of propaganda spread by the rhetoricians of fear.

We’d do better to focus on science, knowledge, community values and a sense of responsibility. And so we come back round to Weber. And we begin to understand that it is essential to rely not on the ship’s cook, but rather on a captain and a crew capable of steering us safely into port.