The closed world, fear and the need to rebuild trust for politics, communities, corporate credit and work 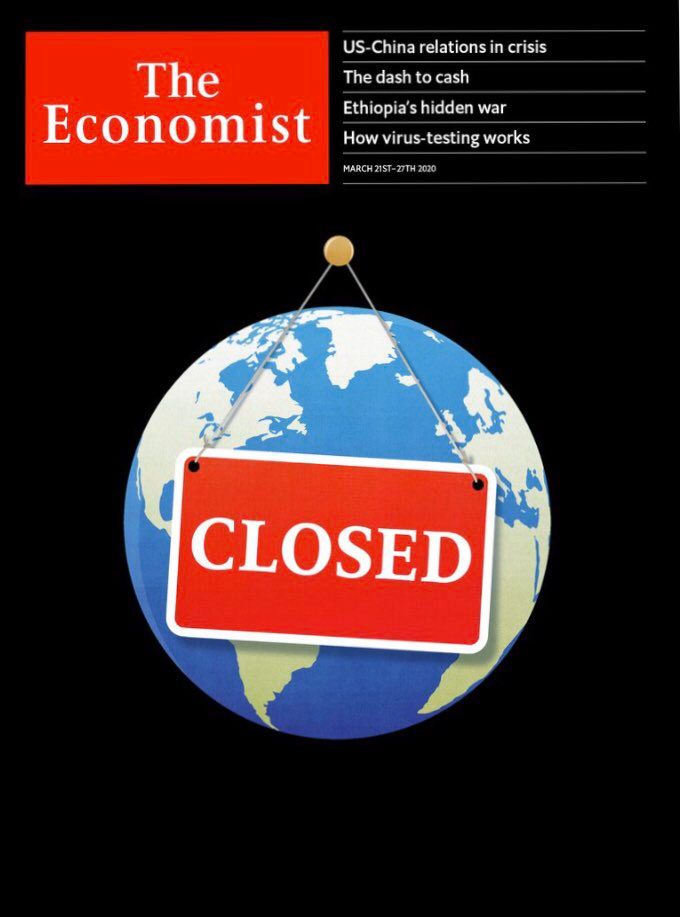 “Closed” – this is the word that appears on a sign hanging across a picture of the world. It’s the very fitting and powerful cover of “The Economist”, on news-stands this week. Everything is closed. Many cities, both small and large, are now closed in Italy, in the rest of Europe and now also in the US, in the wake of the lengthy closures in China. Schools and universities are closed, as are most factories except for those producing medical and pharmaceutical products, foodstuffs and essential goods. Shops, except those selling medicine and food and a few others deemed essential, have shut their doors. They are joined by offices, both private and public, airlines, and tourism and sports facilities. Not to mention theatres, cinemas, music venues, as well as book shops, although not news-stands (quite rightly, as people need information). In short, everything that can be closed has been, in an attempt to stop or at least drastically slow the rate of coronavirus infection.

We are staying at home. In Italy, it is forbidden to travel from one municipality to another (this is the latest order from the Interior and Health Ministers, received last Sunday afternoon). And the overwhelming majority of Italian citizens have been meticulously following the instructions provided by the government, the unprecedented limitations on the vast majority of our freedoms. And Italy is being used as an example to almost all other Western countries who, albeit later than us, are experiencing the alarming spread of the disease first hand, along with high mortality rates. And so, everything is closed. Lockdown – this is the word used when referring to cities around the world.

This is the first time such measures have been imposed since the end of World War II. Empty streets and squares, echoing De Chirico’s unsettling paintings of metaphysical cities, or Sironi’s paintings of melancholy industrial suburbs. Deserted parks. Shutters down. Almost no passengers on trams and buses.

We are living in a state of deep uneasiness and intense anxiety, in an imposed and widely-accepted solitude, removed from the usual rhythms of life, affection, work and social relationships. And yet we forge ahead, struggling to find new ways of living, working, studying, and re-establishing relationships – at a distance. An unprecedented blend of isolation and sociability, almost entirely entrusted to conversations over the phone and words on social media (which is revealing itself as a surprising and vital tool).

One day after another, we continue on our “journey to the end of the night” (speaking of which: now that we have time, it is worth dedicating a little to rereading – or indeed discovering for the first time – one of the greatest novelists of the twentieth century, Louis-Ferdinand Céline: a doctor whose degree thesis dealt with the subject of infection and later a tormented writer, who conducted a rough and poetic quest for truth and the depths of the human soul). We fight through loneliness and fear – fear for our health and the health of those we love, fear of a lonely death, and fear of the difficulties presented by disappearing jobs that we don’t know whether we’ll be able to find again.

In short, we are confronted with the painful awareness of our own fragility. And precisely because we are coming to the realisation that we do not know when all this will end – how many weeks, how many months – beyond the social discipline of isolation, we need one thing above all:

Faith in the possibility of rebuilding a social capital that had become frayed with the passing of time, battered by selfishness, corporate privilege, heightened contrasts, and the poisons that are hate and social envy. And right in the depths of these difficult times, we are seeing clear signs that community spirit is beginning to recover; there is a strong and widespread desire to be useful, a moving drive to share in the possibility of offering help and salvation. Just two little examples of this, among many: the seven thousand-plus doctors who responded to the Presidency of the Council of Ministers’ request for 350 volunteers in Lombardy, and the charitable initiatives that have been rolled out (seven thousand hours of work donated by Pirelli employees to the Sacco Hospital, the value of which has been doubled by the company and added to other initiatives, with a total contribution of 750 thousand euros – just one of many ongoing activities). The “Closed” sign cannot be applied to the humanity of the majority of Italians.

Faith is what is required to finally nurture a good political stance and policy – one that will prove capable of tackling this extraordinary crisis with a sense of responsibility and competence, knowing that naturally, we may make mistakes in the timing and methods of application of some of the measures, but the general interest and that of the health and safety of all Italians cannot be up for discussion, and neither can the future; demagogy, a factional spirit and low-profile interests cannot be allowed to take precedence. A classic quote by Aldo Moro, one of the great statesmen of the Italian Republic, is currently doing the rounds on social media and in our personal conversations: “If it were possible to say: let’s skip today and go straight to tomorrow, I think we’d all agree to do it, but, dear friends, it’s not possible; today we must live, today is our responsibility. We must be simultaneously courageous and confident, we must live in the time that has been given to us, even with all its difficulties”. Courageous and confident, indeed.

Faith in Europe. In spite of everything: the delays, the mistakes, the misunderstandings, the mistrust, the short-sightedness. Thanks to the explicit statement given by the President of the EU Commission Ursula von der Leyen, we now finally know that the Stability and Growth Pact “is suspended” and “the Italian budget can manage the crisis. An end to selfishness”. Furthermore, the ECB has decided to introduce a massive quantitative easing programme, with the purchase of 750 billion euros of bonds in order to combat the economic crisis triggered by the coronavirus and strengthen the foundations of the euro, in the face of collapsing stock exchanges and the explosion of spreads: “Extraordinary times call for extraordinary actions”, explained ECB President Christine Lagarde. It is possible to conceive that, once the crisis is over and Eurobonds and other emergency instruments have been tested to positive effect, we can finally launch a major European development plan, providing substance – in the form of financial means and instruments – to the Green New Deal which has been so widely discussed, or to what has been referred to as “a new Marshall Plan”.

Faith in the future. The future of work, first and foremost. And the future of well-being, of certainty and of the social rights that we have built over time, through hard work, sacrifice and the desire to grow.

Following a drop in GDP that is currently difficult to calculate (-5% in Italy? -1.5 or 2% globally), the economic recovery will most likely not be “V-shaped”, i.e. with a rapid ascent, but rather “U-shaped”, with much longer periods in the lower section of the drop. As such, we face several months, perhaps a year, of hardship.

The picture we are seeing during these painful weeks is terrible, with a total halt or slowdown of the majority of the country’s economic activities, both in industry and across the service sector, in tourism, transport and throughout the endless list of gig-economy trades and professions. Tens of thousands of companies, in all sectors, are in danger of going bust, of closing their doors, never to reopen again, losing a wealth of relationships, skills and knowledge. So it is precisely to these companies – beginning with the smallest, weakest ones – that we must give a sense of faith, and a glimpse of the concrete possibility of a future.

The tool that we need in order to do this? Credit, first and foremost. The ECB’s funds, made available to national banking systems, can be used as extraordinary injections of liquidity for these very businesses. And now that it has been freed from the Stability and Growth Pact, and is thus able to dedicate huge resources to tackling the emergency, the Italian state can deliver loans to compensate for the difficulties faced by companies that need credit to move forward, without blowing the banks’ balance sheets out of the water (and indeed, the ratios also need to be radically altered in order to enable timely financing and refinancing to be granted). Fast, simple credit for businesses, with State loans, to restore faith in work and in the future. This is what is needed, in order to allow us to write a new sign for the cover of a future issue of the “The Economist”, as soon as possible: “Open for business”.