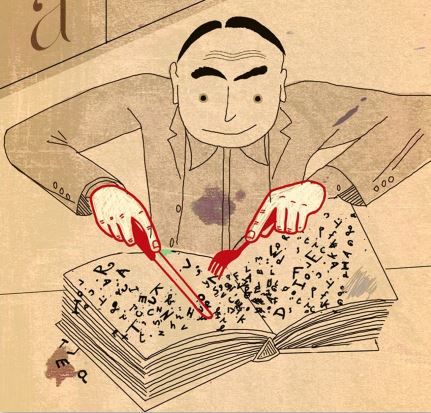 What if I were to invent, buy, produce, sell? Or if it were necessary that someone go, vote, say, want. The subjunctive is important. Essential even. It conveys, clearly, suggestion, desire, possibility. In the information economy age, language is the backbone, not just of “public discourse”, but also of the most sophisticated research, scientific and economic knowledge. The clear articulation of knowledge is vital. In an age of uncertainty and liquid modernity, the subjunctive is the verb tense of contemporary complexity. Abolishing it, as some would advocate, is the last thing we should be doing. It must be safeguarded. Used. Disseminated. For the sake of quality discourse. And of action.

Let’s take a closer look, starting from a question raised by political scientist, Angelo Panebianco (“Sette – Corriere della Sera”, 23 December), in an article entitled,  “A country divided by a verb.” His premise was: “The decision, even if purely academic, that we can stop using the subjunctive, and therefore stop teaching it, will actually widen the social divide, not close it.” Class differences are, in fact, “a lot less evident than they used to be.” Aside from appearances (clothing, customs, spending habits) “language habits are probably the biggest marker of social differences. When I hear a young person speak, it doesn’t take me long to work out if he went to a good or mediocre school, and if his family is rich or poor.  If I had to choose between two relatively well qualified people, “I’d hire the one with superior language skills.” Use of the subjunctive can swing such a decision. It can be vital in the labour market too, and for the future of younger generations. An issue once raised by Lorenzo Milani (worth re-reading, fifty years after his death, perhaps in the biography recently published by Mario Lancisi for Laterza, “Processo all’obbedienza” is back on the table.

The risks of a declining use of the subjunctive is, as most will be aware,  a recurring theme in public debate. Facebook is thick with groups defending it. If use of the subjunctive is dwindling, “let’s not make a big deal out of it,” said Francesco Sabatini, a leading exponent of Italy’s Accademia della Crusca (language academy), in his new book, “Lezione di Italiano” (Italian lesson) published by Mondadori. He also added that “we must respect that “language evolves and “try not to take an aristocratic approach.”

So it’s farewell to the “aristocratic” subjunctive, then? Perhaps. If it were to go, Italian would be all the poorer, more vulgar, and robbed of essential nuances of meaning and substance. Not to mention one more very noticeable disadvantage for the poorer, more fragile, less well-read parts of society.

Current trends to make school “easier”, with less demanding subject matter and more lenient testing (abolishing written exams, for instance) are steps in this inauspicious and deleterious direction. Philosopher Nuccio Ordine had this to say:  “Impoverishing public education means penalizing children from the poorest of families (the rich can take their children elsewhere.)  Knowledge needs time, hard-work and perseverance. Haste and blandness are enemies of learning.” (Corriere della Sera, 20 December.) As the abolition of the subjunctive would be. We have to insist if we are to defend it. And use it more. And better.

Language is, therefore, a responsibility. Like power. And also a tool of democracy (the teachings of a linguist the likes of Tullio De Mauro, who passed away a few days ago, and Antonio Gramsci’s analysis of the “political nature of every aspect of language”, are becoming increasingly relevant in this regard.)

There is also another lesson to be born in mind, summed up in the phrase: “A labourer knows 100 words, the owner knows 1000. That’s why he’s the owner.”

It’s been fifty years since the “Letter to a teacher at the Barbiana school” was published. This seminal text on the power of language and the importance of education was written by Catholic priest Lorenzo Milani (a much-loved scholar, adored by De Mauro, who considered him a master, and by the many young pupils who studied with him in his remote village on the Tuscan hills.) The thought expressed continues to be amazingly topical. Average education levels have risen significantly, it’s true. It’s also true that the need for knowledge and skills, in order to respond to the many questions thrown up by our controversial contemporary world (the economy, science, research, the quality of life and the environment), has risen even more.  General levels of culture, though, have not kept pace, and therein lies the main problem.  Language, a tool and testament of culture, has not improved either.

We are faced with a rise in skills, in both nature and depth, but no corresponding rise in critical, conscious knowledge.  This is an issue of fundamental importance. It affects civil life (what purpose is there in being a citizen incapable of “public discourse”, namely participating in political debate and social policy?), economic development, the professional development and quality of the “establishment”, the very foundations of democracy (the danger of populism also lies in the mediocre language, the coarse and loose nature of  dialogue, of its exponents.)

In culture lie the tenets of power, even today. In the production and control of knowledge, and therefore also in the richness of written and spoken language. In the sophisticated command of language (or better still, of languages) in all its forms and modes. Including the subjunctive, obviously.