Business that will save Italy 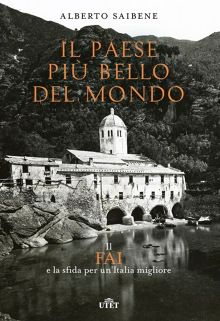 The history of FAI speaks of a civic passion that everyone can learn from, even in modern industry

Doing business is a multi-faceted undertaking. Entrepreneurial adventures are not always measured by the amount of profit they make. First and foremost, doing business involves setting a goal and working hard to achieve it. Rarely is that goal achieved by a lone individual. In fact, a good business is one that succeeds in its endeavours by involving many people. This is true not only in business and in manufacturing, but in the fields of art and culture, as well as the social sphere.

At the core there must always be a culture (and not only of production) that manages to put people ahead of everything. To understand more about this complex reasoning, it’s helpful to read Il paese più bello del mondo. Il FAI e la sfida per un’Italia migliore (‘the most beautiful country in the world: FAI and the challenge of making a better Italy’), written by Alberto Saibene, a thoughtful historian of 20th-century Italian culture. The subject of the book is the complex, fascinating and certainly not uncomplicated history of FAI, the National Trust for Italy.

Written not as an essay but rather an often frantic chronicle, of what has happened since the day after the end of the Second World War, up until to the present day. The history is centred around the companies who made it their a goal to save the most beautiful country in the world from increasingly pervasive and rapid degradation. It explains how a cultural and natural ecosystem that had made it through the Second World War more or less intact found itself, in just a few years, seriously threatened. More than the disasters of war, it was rapid unchecked reconstruction that ruined the face of our country. Some began to react. First was the association Italia Nostra in 1955, then the exhibition ‘Italia da salvare’ (‘save Italy’) in 1967. In 1975 FAI was founded to acquire and manage property and assets and then open them to the public. It was an organisation not for profit but for another goal, that of defending Italy against the havoc caused by the economic boom and an unrestrained race for affluence at all costs. Saibene tells its history without holding back and leaving no stone unturned. The characters and events appear before the reader’s eyes. They represent the cream of Italy in terms of its culture and care for its heritage. The story speaks not only of those who dedicated their lives to FAI, like Giulia Crespi, Elena Croce, Antonio Cederna and Renato Bazzoni, but also wonderful figures from post-war Italian culture (Corrado Alvaro, Giorgio Bassani, Italo Calvino, Benedetto Croce and many others). Then finally up to the often enlightened entrepeneurs in industry, pillars of the country’s history (the Falcks, Agnellis, Borlettis, Pirellis and others).

The history of FAI is therefore a history of Italy in another form. A history of successes, both economic and not, combined with crushing defeats, has fostered a civic passion that could probably only find space to grow and develop in this, the ‘most beautiful country in the world.’ Alberto Saibene writes in a journalistic style and, for the first time ever, tells the history of the largest private cultural enterprise in Italy. It is a story of passion and responsibility, of beauty and daily struggle. These are the necessary qualities of every good organisation.

There is a beautiful quote in the opening pages, from a travel report by Cesare Musatti, who was touring Italy for Olivetti in the early years of reconstruction. Musatti notes that there can be no economic development without social and civic progress. An affirmation that holds true today.