Collaboration a must between firms and universities 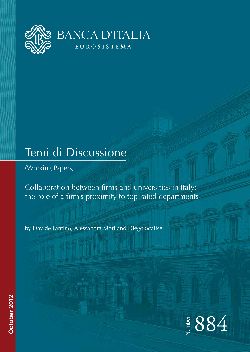 How do firms, universities and public research centres work together in Italy?

This is an important question for understanding the capacity for research and innovation of Italian production and also how close Italian corporate culture is to the rules of R&D. An attempt at answering it has been made by economists from the Banca d’Italia (Davide Fantino, Alessandra Mori and Diego Scalise) with “Collaboration between firms and universities in Italy: the role of a firm’s proximity to top-rated departments”, a working paper published in October. It is based on an observation: in Italy there is a model of “innovation without research” applied by firms in general and which requires special conditions for implementation.

A situation that is typical in Italy lies at the root of all this: the cost of R&D in relation to the GDP is 1.26%, as opposed to a European average of 2. As part of the overall expenditure the share borne by companies, usually the most dynamic, is approximately 50%, a value below the average of the main European countries. In other words R&D in Italy is supported by the public sector and above all by public research centres and universities, which enter into collaboration agreements with firms. But how?

Ease of dialogue between firms and research bodies becomes decisive. In order to gain a better understanding researchers from the Banca centrale used a series of mathematical models, applied by taking account of the distance, the quality of research bodies within the territory, their policies for adding commercial value to the research results, the importance taken on by the various study areas for the different economic sectors and the main features of firms.

The results are simple. The main decisive factor of the probability of an agreement between firms and universities is the “proximity” of the two parties. Furthermore the proximity to a generic university is of no influence. Small and medium-sized firms appear more affected by physical distance, while large ones tend to choose as partners the universities which better valorise the results of own research irrespective of location.

The end result, not reassuring, is that public research cannot fully replace work on innovation within firms.

Collaboration between firms and universities in Italy: the role of a firm’s proximity to top-rated departments