How we achieved globalisation 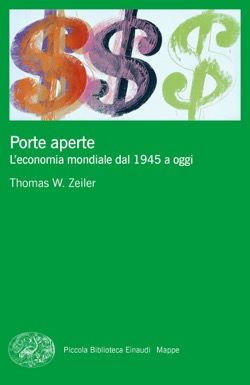 An essay recently translated into Italian helps us to better understand the path that led us to the present day situation.

Over 75 years of economic, political and social tangles leading to the present day. A story that helps us better understand not only the social and political path undertaken by Europe and the world, but also the context in which industry and enterprise have, more in general, evolved. In other words, a process of globalisation that started behind closed doors but, despite everything, ended up in the open. This work, by Thomas W. Zeiler (who teaches at the University of Colorado Boulder and has been studying great global movements for a long time) includes all this. Porte aperte. L’economia mondiale dal 1945 a oggi (“Opening Doors in the Global Economy” chapter in Global Interdependence, Vol. IV: The World After 1945 (A History of the World)) is a good read for those who wish to truly understand the (not always straightforward) workings of the evolution of the global economy in the last decades.

The essay, which cross-references history, geopolitics and economics in exemplary fashion, pieces together the origins and the transformation of global economic interdependence. A path in which the decisive role undertaken by the United States in promoting an open and connected commercial, investment and transaction system, which was to become the true gateway for contemporary economic globalisation, has been (rightfully) emphasised.

Accordingly, the author explains how, indeed, what we are experiencing today is simply the result of a political approach variously intertwined in the American strategy of the Cold War period, whose aim was to consolidate the economic power of the Western allies against the Eastern Bloc nations. This despite some incongruities, as while the Cold War promoted breaking up the world into blocs, after 1945 the global economic powers were actually frantically pulling in the opposite direction.  Not only – if, on the one hand, all this helped to restore the nations ravaged by World War II, on the other hand it also contributed to the emergence of other countries, so much so that they became fierce rivals of the US.

Zeiler’s work explains all this in plain and clear language, over four distinct chapters that lead the reader from the devastation wreaked by World War II to the COVID-19 pandemic. Sure, each page demands careful reading, but once reached the end readers will assuredly be able to look at current events with a more critical eye.

Porte aperte. L’economia mondiale dal 1945 a oggi (“Opening Doors in the Global Economy” chapter in Global Interdependence, Vol. IV: The World After 1945 (A History of the World))