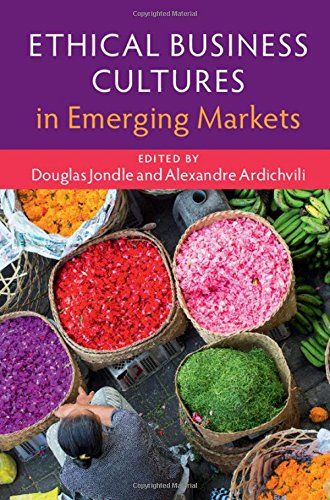 Companies seen as porous bodies which absorb suggestions and principles from the system in which they operate; and which spread just as many. Manufacturing cultures that build their own ethic but not one that is independent from the rest of society. This is what also happens in emerging countries. This latter situation is quite particular, and it should be understood in full. Especially at a time when globalisation is a pervasive phenomenon and which we cannot ignore.

This is what Douglas Jondle and Alexandre Ardchvili have done in their “Ethical business cultures in emerging markets” which was just published. The book deals with the topic of business ethics from the point of view of developing countries. The authors start with an observation. Previous research on business cultures and on the ethics of entrepreneurial cultures have focused almost exclusively on the studies dedicated to large multinational corporations from a handful of developed countries. Other companies have almost completely been forgotten.

The literary work of Jondle and Ardchvili looks instead to what can be described as the intersection of the development of human resources and the management of human resources in business cultures present in the four BRIC countries and in four other rapidly growing emerging economies: those of Mexico, Indonesia, South Africa and Turkey. It looks, in other words, to that part of the world with which “the industrialised West” now has to deal with continuously yet which it often does not know in-depth.

The book then compares the perceptions of managers and employees of the companies in those countries, comparing them with the US economy, in other words with the Western business culture par excellence. In addition to this, Jondle and Ardchvili investigate the economic and socio-cultural context and the business ethics in each of these countries, including the implications for research and practice.

“Ethical business cultures in emerging markets” is a good tool to realise the existence of different cultural worlds within companies that apparently may instead appear uniform. A theoretical approach, which can however have extensive operational repercussions on those who work with emerging countries.