Family firms and the community: the enduring bond 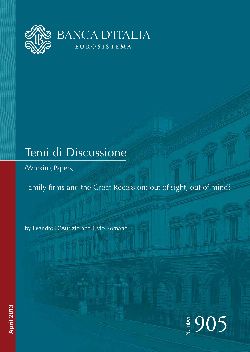 Companies, above all family companies, are part of a community. Indeed one of the distinctive characteristics of the family firm and its culture appears to be attention to local, “personal”, lasting connections with the local area. Not in terms of the workforce, but the origins of the company and its management approach. These aspects come to shape production, which responds in a distinctive manner to external forces: recession, the markets, production costs, competition.

All of this is highlighted by Leandro D’Aurizio (Banca d’Italia) and Livio Romano (Istituto Universitario Europeo), in an insightful study just published by Banca d’Italia, “Le imprese familiari nella Grande Recessione”, that analyses the behaviour of multi-plant family firms in the period known as the “Great Recession”, from 2007 to 2009.

In particular the study, which drew on data from a survey of companies conducted by Banca d’Italia (Invind), looks at the adjustment of staffing levels in Italian family firms following the recession.

The results speak for themselves: “During the recession”, the two economists explain, “Multi-plant family firms focussed on maintaining staffing levels at their head office rather than outlying premises. In particular, within-firm changes in staffing levels actually led to a slight increase in the number of employees in the head office, compared to a decrease in non-family firms”.

The authors explain that this is probably due to the practical application of the concept of “social recognisability”, based on the psychological and emotional bond between the company owner and the community.

This factor, which is evident enough to be measured statistically, represents tangible evidence of the corporate culture that continues to be firmly embedded in Italy, above and beyond the recession and temporary problems.

Le imprese familiari nella Grande Recessione (Family firms and the Great Recession: out of sight, out of mind?)