How have enterprises in Italy been innovating? 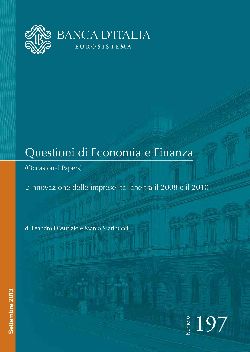 Innovate. Research. Transform. Grow. These could be – and should be – some of the fundamental principles of any enterprise worthy of its name, but they aren’t easy to truly put into practice. That’s not always the fault of the business’ leadership, though. To do research and development (the ubiquitous “R&D”), it takes significant funding; it takes time, and it takes the right focus.

It’s also important to understand just what has happened to Italian businesses when it comes to R&D. We need to understand what could have been done better, and we need to try not to make the same mistakes again.

A paper by Leandro D’Aurizio and Marco Marinucci (both with the Bank of Italy’s Economic and Financial Statistics unit) can help us to understand what happened to R&D in Italy from 2008 to 2010. What we find is important, particularly because of the numbers that point to how things really are. In fact, the paper describes research and development strategies using the data from the annual survey of businesses (Invind) conducted by the Bank of Italy itself,

and the results can be summarised into five points that provide bitter confirmation of what we may have only read in the newspapers.

First, the size of the organisation plays a crucial role, with the small to mid-sized businesses having greater difficulty both investing in R&D and producing the various forms of innovation considered than larger firms are experiencing.

Second, enterprises that export show a greater propensity for both investing in R&D and filing patents. Third, a propensity for investing in R&D would appear to be tied, in part, to the approach to management. Fourth, businesses in southern Italy seem to have greater difficulty in investing in R&D and in innovating. Fifth, businesses mainly resort to self-financing, making only limited use of external sources of funding such as banks, venture capitalists or public funding, which appear to have a modest ability to impact on the decision to invest in R&D.

In short, the long road of R&D in Italy is evidently still long and winding.