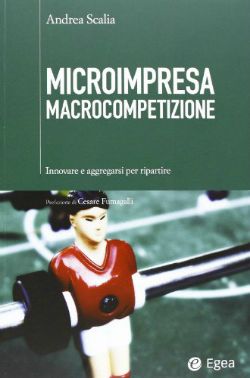 Small firms, the very small ones, so-called microenterprises, nevertheless tackle major competitors. A little like David against Goliath, there are thousands of businesses of this type which, in some way, take on the world and often succeed. Understanding how they do it is important and also fascinating. These firms have it all: Italian genius and production folly, creative flair and heedless calculation. As well as innovation and aggregation, craft production and haute design. What really happens is however often difficult to understand.

Microimpresa macrocompetizione. Innovare e aggregarsi per ripartire [“Microenterprise macro competition. Innovation and aggregation for a relaunch”] by Andrea Scalia makes an attempt by starting, as is explained, first of all from a great passion and experience with the microenterprise, that ideal place of production where humans are responsible for and play a leading role in their own working lives. A place that differs from the large factory, possibly slightly idealised, which also represents a different corporate culture. Aside form the contrasts which leave little space for anything else, the work by Scalia concentrates on the world of microenterprises in manufacturing, services, trade and agriculture which represent an organisational form which is much more widespread than is commonly thought: firms in Italy with fewer than 20 employees are approximately 98% of all those in existence.

Scalia therefore gathers together and investigates, and studies in depth, the typical features of microenterprises, eventually focusing on the increasingly strong need for aggregation also of these organisations whose basic value however remains unchanged. Starting from the special kind of innovation practised in them which, as the book says, is the keystone for Italian entrepreneurs who have always been careful to add special features and value to their work, that innovation which is often invisible, carried out day after day with an obsession for perfection, the unseen, that which is in global value chains, that which is now developed in the networks and in the connections of the global world.