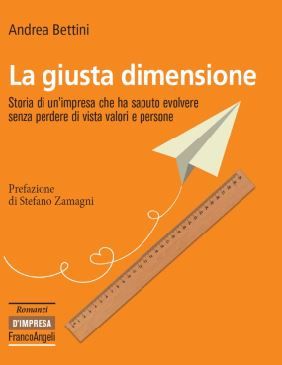 A book tells the tale of how a carpenter’s shop can become a Benefit Corporation, create prosperity and be an example to follow

Every company is an organisation that differs from all others. Every business is something unique, inimitable yet to discover. Learning about the story of each company is therefore always something to do, something good to grow one’s knowledge of the manufacturing system within which all companies operate to various degrees of success. Reading “La giusta dimensione” (The right dimension) by Andrea Bettini which has just been published is therefore useful for those who want to find out more about what a company means all around.

The book is not a story of how to manage a successful company. It is not a story written according to the traditional canons of business historiography. “La giusta dimensione” is the tale of an entrepreneurial experience set up in a cellar, which has progressed successfully until the present day. Bettini – who is one of the most important exponents of what is referred to as corporate storytelling  -, has told the tale of Zordan in Valdagno, starting from the beginning as the carpenter’s shop of Attilio Zordan for Marzotto, covering its subsequent growth and crisis in 2008 and right up to the current day with his three children at the helm of a now evolved, international and adult company. Behind practically each milestone, the reader catches a glimpse of the corporate spirit, its culture, as a fertile substrate for everything the company has managed to achieve. A culture consisting of abnegation for work as well as family ties, focus on people and on the future, solid principles and the ability to react (that particular resilience which is highly fashionable today), almost inherent to the genetics of the parent and that of his offspring.

The book is easy and quick to read. After an initial historical part, Bettini writes the second part which tells of the crisis period and, lastly, the third part which sets out the operating principles which have enabled Zordan to become what it is today. With two targets reached in addition to those of the balance sheet and employment. Indeed, today Zordan is a B Corp certified company (that certifies compliance with the strictest standards in terms of social and environmental performance as well as transparency), but it is also a Benefit Corporation that incorporates into its own purpose not only profit-targets but also aims to have a positive impact on society and on the biosphere.

The book (which is just a little over 100 pages long) is enriched by multimedia content which can be downloaded by framing certain pages of the book and, most of all, the fact that proceeds from its sale (by express wish of Zordan and of the author) will go to art4sport, an Onlus non profit-making Association that believes in sports as therapy for the physical and mental recovery of children and youths with artificial limbs. A company that is not only busy making a profit, Zordan, following the strong tradition of Benefit Corporations.

La giusta dimensione. (The right dimension – The story of a company that was able to evolve without losing sight of values and people)