The culture of intangible production 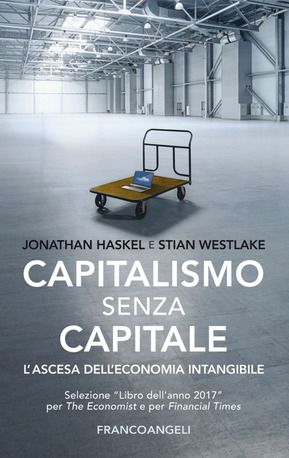 Intangible factories. Real yet virtual production. A business culture that, sometimes, does not appear to hold onto anything from the past. Yet it is a culture that remains tied to production, although on entirely different bases from before. Observing a certain part of the manufacturing and economic panorama, this would seem to be the conclusion: there has been a switch from a prevailing production of tangible assets to one of intangible assets. This process is not complete, obviously, but it is definitely under way, albeit turbulently in certain sectors. This process however needs to be understood.

Reading “Capitalismo senza capitale. L’ascesa dell’economia intangibile” (Capitalism without capital. The rise of the intangible economy) by Jonathan Haskel (Professor of Economics at the Imperial College, London) and Stian Westlake (Senior Fellow Nesta, the British national foundation dedicated to innovation), is therefore a good idea, and should be done attentively. The book has just been published in Italy and it starts with an observation: at the beginning of the twenty-first Century, a silent revolution has for the first time led economies to invest more in intangible assets (design, branding, research and development and software) rather than in tangible assets (such as machinery, buildings and computers). And that’s not all, because, for practically every type of business, the ability to handle intangible production tools has become crucial for the very survival of manufacturing activities.

This is where the two authors start from, in their exploration that is not only of what is referred to as the new economy but especially of some of the great economic changes of the last decade. This is also a useful journey better to understand the present and the future that awaits businesses.

The book is not always easy to read, but it has the great advantage of being sorted clearly, starting with the definition of intangible economy, then outlining the measurement methods and the differences in investment. Haskel and Westlake then move on to address the consequences of the intangible economy: the differences which occur in production organisations, the rise in inequalities, the financial challenges, the need for new skills, the public policies required.

The book ends with a presentation of three possible future scenarios and outlining how managers, investors and policy makers can exploit the peculiarities of this era in order to grow companies, commercial investment and national economies.