What happens when ethics joins the firm? 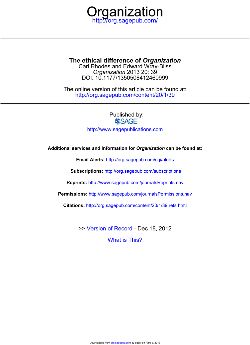 How are ethics and corporate organisation interlinked? What is the upshot of interaction between the daily life of production organisations and action by individuals? How much is “ethical” in a company? These are not questions that are ends in themselves but queries whose answers are useful for understanding further how corporate culture evolves, the conduct by companies with respect to production, the market and the work force, the degree of freedom of the latter and the structures where they work.

However for a better understanding guides and cognitive maps are needed, such as the one written by Carl Rhodes (University of Leicester) and Edward Wray-Bliss (Deakin University, Australia).

The ethical difference of Organization, which appeared recently in the magazine of the same name, is a true handbook that guides us through 20 years of literature produced in order to analyse the links between ethics, companies, organisation and individuals.

While traditional corporate ethics, the two authors explain, focuses on the ethicality of the organisations themselves, the pivotal questions which have emerged in two decades of studies also concern the way in which individuals interact ethically in respect of the corporate organisations and how some corporate agreements can be challenged politically in the name of ethics. The latter therefore can be transformed from a positive element of management also into a paradoxical restraint on development when it reflects the interests of the few to the detriment of those of many.

Rhodes and Wray-Bliss however go further, eventually identifying in corporate (and social) systems a business ethic and also an ethics of consensus and an ethics of difference, different faces of a same concept which are often however confused in practice.

A clear explanation is given in around ten pages of the links and bonds between the particular ethic adopted in companies and society and the processes of growth of companies, their culture, nature and perception.

The ethical difference of Organization