A Book at the Company 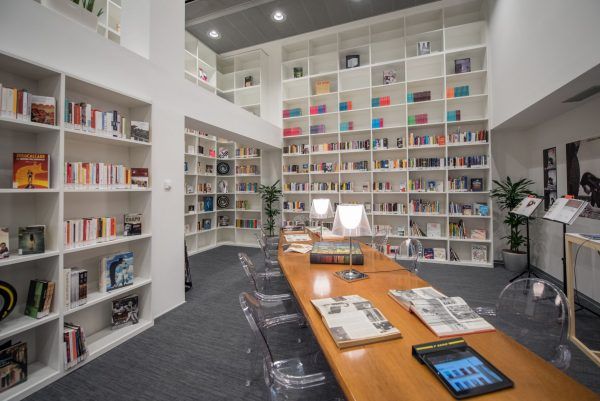 “The Pirelli Cultural Centre came into being spontaneously in one of the company canteens, when some workers realised that what they had in common was not just work, an appetite, and a canteen, but also a series of pressing spiritual needs”. First of all, a need for knowledge: the knowledge that comes instinctively from the pages of books. This was the message conveyed by the article “Culture as a Staple”, written by Silvestro Severgnini, the director of the Pirelli Cultural Centre, for Pirelli magazine in 1951. In the 1920s, Pirelli had already provided its workers with a very special department in the factory, where books showed up alongside machines. A place where they could read, and share, and interact with culture. “The importance of reading in a person’s education has always been written into the company’s DNA. Today we have libraries in Settimo Torinese, in Bollate, in Bicocca and we are linked up to the entire Milanese Library System (SBM). This provides access to over a million documents, videos, magazines, newspapers, and books. We believe that reading is an important part of people’s lives and it is part of the relationship between Pirelli and culture that has always been at the heart of the open society in which Pirelli has its roots.” These are the words of Marco Tronchetti Provera, CEO of Pirelli and President of the Pirelli Foundation. The Pirelli Foundation now manages this network of company libraries, which – together with the SBM project – expands the range of cultural opportunities in a virtuous circle with public institutions. Libraries are also a place for meeting and coming together at the workplace, and a powerful incentive to interact with the world around us: a book in the company is a passport to an idea of welfare that is as time-honoured as it is relevant today. “What’s great is that innovation in Pirelli is not just in its core sector, which is of course technological, but it is also linked to a new way of approaching work methods and spaces. This too is innovation,” says Davide Sala, Executive Vice President and Chief Human Resources Officer. “Business and culture not only coexist, but they nourish each other in a way that is increasingly beneficial.”

Video
Un libro in azienda (A Book at the Company)
close