Pirelli Libraries: A Means to Welfare and Wellbeing 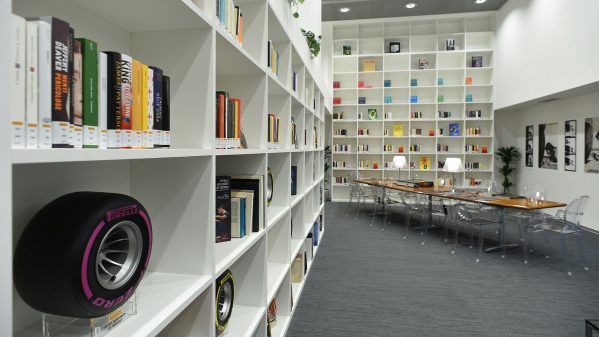 The conference entitled “Biblioteche in Azienda: strumenti di welfare e di benessere“, organised by CSBNO today, 14 March, at the Stelline Foundation examines the theme of the library at the workplace. The discussion will focus on culture in companies, on the quality of work, and on company libraries, looking at the experiences of various companies. Pirelli will be present with a speech by Antonio Calabrò, Director of the Pirelli Foundation, which now runs the company libraries in Milan and Bollate.

Company libraries are a tradition that Pirelli has kept going for almost a century. The first Pirelli library was set up in 1928, when a subscription library with 800 books was made available to members of the Dopolavoro Aziende Pirelli, the workers’ club. This was one of the first examples of reading being promoted within a company. Pirelli now has three company libraries: in the offices of the Headquarters in Milano Bicocca, in the factory in Bollate, and in the Industrial Centre in ​​Settimo Torinese. These three libraries together offer employees over 10,000 books. The Milan libraries have over 500 registered users and more than 320 subscribers to the periodical newsletter, and they make more than 250 loans and renewals each month. The libraries are just one of many projects introduced by the company to improve the quality of life at the workplace: “The importance of reading for a person’s education has always been written into the company’s DNA. Today we have libraries in Settimo Torinese, in Bollate, and in Bicocca and we are linked up to the entire Milanese Library System (SBM). This provides access to over a million documents, videos, magazines, newspapers, and books. We believe that reading is an important part of people’s lives and it is part of the relationship between Pirelli and culture that has always been at the heart of the open society in which Pirelli has its roots.” These are the words of Marco Tronchetti Provera, Executive Vice President of Pirelli and CEO and President of the Pirelli Foundation, showing how the Pirelli Libraries have become an essential part of the urban fabric in which they are rooted. They have also entered the library systems of the areas they are in: the Milano Bicocca library has been integrated into the Milanese Library System (SBM) and the one in Settimo Torinese collaborates with the Library System of the Turin Metropolitan Area (SBAM). A virtuous system of interaction between public and private.