Passing the Baton: From Business to Institution 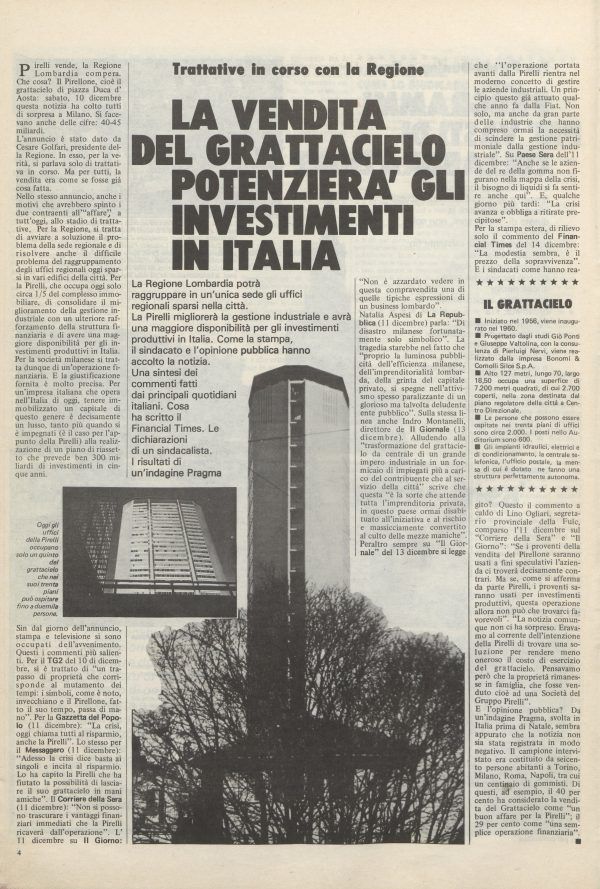 The news came out in the papers on 10 December 1977: Pirelli had decided to sell the Tower. A purchase proposal was put forward by Cesare Golfari, the president of Lombardy Region, and the sale of the building was finalised a few months later, in June 1978. To deal with the crisis the West had been going through for five years, the Pirelli Group launched a five-year industrial restructuring plan, and reinforcing its financial structure by selling the tower was an essential step towards this. In actual fact, the Group occupied only a fifth of the total space of the building at the time.

Lombardy Region, which had been officially set up in 1970, urgently needed to find a single headquarters for all its various offices, which until then had been dotted around Milan. Once again, the bond between Pirelli and its territory became stronger: the “Pirellone”, once a symbol of a Lombard company, became a symbol of the region itself.
One by no means secondary detail: the Rosa Camuna, the symbol of Lombardy Region since 1975, was designed by a pool of artists that included Bob Noorda, Pino Tovaglia, and Bruno Munari. In other words, key name in the history of Pirelli visual communication in the 1950s and 1960s. These designers had considerable first-hand experience of the Pirellone interiors and had certainly met many times up on the twenty-fifth floor, where the company’s advertising offices were located.

In 2002, the twenty-sixth floor of the building was destroyed by a small private aircraft that crashed into the building, causing the death of a number of people. After a long period of closure, for safety reasons, and restoration works that involved reconstructing the facade and the internal premises, the building was reopened in 2004, with a new auditorium named after Giorgio Gaber. The twenty-sixth floor is now a memorial to commemorate the victims of the crash.